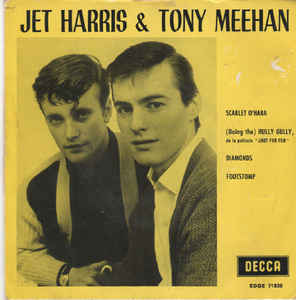 Tony Meehan: Why I Left The Shadows

I AM A FIRM believer in following the policy which maintains that, since life is so short, it is most important that one should do ...

PROGRESS report on: JET HARRIS. Since he left the Shadows to plough his solo way through show business, he has three packed-out, lifting-the-roof audiences deciding ...

Jet And Tony Can't Wait To Cut That Disc

"JUST THINK, me and Tony together again after a year. I think it's the greatest, in fact, I'm so excited that I just wish we ...

THAT'S WHAT WAS SAID WHEN JET HARRIS AND TONY MEEHAN LEFT THE SHADOWS — 'DIAMONDS' PROVED THEM ALL WRONG... ...

The first and greatest bass guitarist of the Shadows, he also topped the charts with drummer Tony Meehan. ...