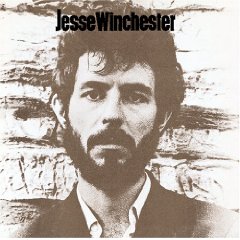 The songwriter-in-exile talks about his religious background; his stay in Munich; getting his draft notice and moving to Montreal; meeting Robbie Robertson and signing to Ampex; being managed by Albert Grossman and joining Bearsville; his recorded output; favourite covers of his songs; being supported by Joan Baez, and still not being allowed back into the USA.

Jesse Winchester: Learn To Love It

ON JESSE WINCHESTER'S first two albums, Jesse Winchester and Third Down, 110 To Go, the fine balance struck between conviction and melodiousness, simplicity and eloquence ...

Approximately 286 Reasons Why You Should Listen To Jesse Winchester

IF YOU'VE BEEN a reader of Zigzag for as long as I have, i.e., since very early on, you'll recall how at the start there ...

Jesse Winchester: Learn To Love It

THIS IS BOTH Jesse Winchester's third album and his third good album. ...

JESSE WINCHESTER is diffident, reluctant to elaborate on the bare essentials of his biography. He was born in Louisiana, brought up in Memphis, studied in ...

CERTAIN QUALITIES seem to be needed for a musician to become a hero to the man in the street who buys a lot of records ...

Giovanni Dadomo releases his frustrations to tell you all about Jesse Winchester ...

"THE NEXT NUMBER is by a songwriter who we really like... his name's Jesse Winchester". (A liberal smattering of applause). "Great... you like him too!" ...

THE ATMOSPHERE AT the small Montreal studio was so much like a living room's that it was hard to believe it was anything more than ...

Winchester '77: Jesse Trades His Burden For A Breeze

MONTREAL— Hands jammed into his back pockets, Jesse Winchester stands at the window staring holes through the spring snowstorm. Birch logs spit and crack reassuringly ...

The quiet and low-key Jesse Winchester

Jesse Winchester: Seems Like Only Yesterday: Live in Montreal 1976

AMONG THE more effective pieces of ordnance most writers keep close at hand is a gift for understatement. Jesse Winchester's arsenal has always been well-stocked. ...