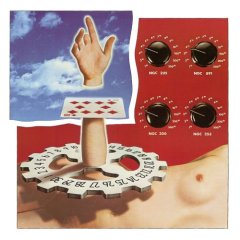 Recorded during the Dead's 1969 peak, Garcia looks back to the early days of the Warlocks, the Acid Tests, goes through the albums to date (including the soon-to-be-released Live/Dead) and expounds on the music.

This is a transcript of Michael's interview with the Grateful Dead mainman. Hear the audio here. ...

Dead Leader Who Is Very Much Alive

I HAD, I CONFESS, expected something different. Two sides of 'Dark Star Revisited' would have perhaps been a predictable dosage. Instead, we get several very ...

GARCIA stabs at the record business — 'We want to get out' ...

Jerry Garcia Up From The Dead

DAVID GAHR is already a half-block ahead of me up the street, bounding past the Navarro's sharpy redcap, shlepping all his cameras, and lights, and ...

Moon Jasmine: The Night Jerry Garcia Forgot To Tell Me Something And I Forgot To Ask

1. San Francisco Jerry Garcia wanted me to write a story about him. That was the deal. I was managing this folksinger who needed ...

UNCLE JEROME'S fourth foray into the solo light gets some of that old Dead sound back to base. Just in time I guess. ...

AS EVERYONE knows, Grateful Dead fans come in all sorts and sizes — including one Elvis Costello. And so, when Musician got the idea of ...

An Interview with Jerry Garcia

IT WAS THE first thing that happened to the Grateful Dead when they arrived in New York City on June 1, 1967, and Jerry Garcia ...

THE GRATEFUL Dead have canceled a four-city fall tour of the East Coast and have put other plans on hold until Jerry Garcia recovers from ...

The Grateful Dead bounce back with new releases and a tour in '93 ...

IMAGINE BEING able to skip through time and witness historv first-hand. On my own list of happening temporal destinations would be McGoo's Pizza Parlour in ...

MEMBERS OF THE Grateful Dead and the widow of Jerry Garcia spent yesterday making plans for a funeral, while tributes continued to roll in and ...

Richard Gehr pays tribute to the mind-bending music and halcyon spirit of the late Jerry Garcia. ...

SERENITY KNOLLS lies at the bottom of a dead end road in northern Marin County, California. The main building stands above a parking area surrounded ...

On August 9, Jerry Garcia, leader of the Grateful Dead, the most successful live group of all time, died in a Californian rehab center. To ...

Jerry Garcia: A Lifetime of Inspiration

HALLOWEEN 1995, just before midnight. I don't have any poetry to offer here. I lost that facility long before Jerry Garcia's death. I know too ...

The Burden of Being Jerry

Carolyn "Mountain Girl" Garcia was victorious in her lawsuit against the estate of her late ex-husband, Jerry Garcia. Following the guitarist's death in August 1995, ...

Keyboard wizard who often worked with Jerry Garcia, with or without the Grateful Dead ...

KEYBOARDIST MERL Saunders' decision to sit in at a regular jam in San Francisco's Matrix club one night in December 1970 would prove a stroke ...