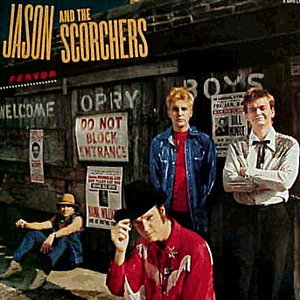 Jason and the Scorchers: Can't Be Real If It Ain't Got That Feel

SWEAT-SOAKED and sprawled on a couch in the dressing room of Atlanta hot-spot 688 club, Scorcher guitarist Warner Hodges pulls on a cold one and ...

Jason and the Scorchers: Fervor

EVEN ALLOWING for the Women's Wear Daily pop-corn which often passes as critical comparison in rock I can't help but loathe this catchall term "cowpunk". ...

Rhinestone Ploughboys: Jason and the Scorchers

Blues, country and heavy metal!...Can this really be the lethal cocktail that has gained The Scorchers Nashville respectability? CYNTHIA ROSE settles down to a ...

Jason and the Scorchers: Meanwhile, Back at the Raunch

ON MY TRAVELS through the murk of our crapulous rock underworld (good start, eh?), several unconnected geezers have name-dropped Jason and The Nashville Scorchers to ...

Jason and the Scorchers: Fervor

WITH MUCH contemporary sound becoming more than a tad anaemic (they know who they are), we must turn our eyes to the West for a ...

Jason And The Scorchers: Blazing Saddles

EVEN IF Willie Nelson only releases 10 albums this year, 1985 has already distinguished itself as a truly terrific time for good old-fashioned Amurrican music. ...

MIDWAY THROUGH 'Moonshine Guy', the opening track on The Scorchers' first album of all-new material in 14 years, the music stops abruptly to allow a ...