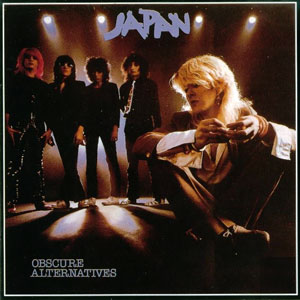 Are Japan just a bunch of pretty boy remnants of glamrock. Or do they know something that the rest of rock 'n' roll is yet ...

Heaven must have scent you ...

Japan: The Part Of Arties

LIFE WITHIN buildings: being shut in a dimly-lit, secluded studio with David Sylvian. Sounds like a scenario straight out of a Nipponese schoolgirl's fantasy, but ...

David Sylvian and Mick Karn stretch out on the sofa and enjoy their new-found British success. Budge up, says Dave Rimmer ...

Once upon a record there was a wonderful land where nothing nasty happened and sad beautiful boys lived... ...

MELANCHOLY PROPS up his head and whispers, half to himself and half to me... ...

CONTRARY TO popular belief, all synthesizer bands are not unlistenable. True, many do sound rather like the result of an infinite number of silicon chips ...

Music Without Musicians...But Not Without Craftsmanship and Great Songs ...

David Sylvian: Journeys Into The Interior

FOR ONE who seems so still David Sylvian is constantly on the move. ...

THIS WAS, after all, one of the stranger groups of musicians who went the route of pop's long march. ...

He was the sensitive soul who fronted south London’s dodgiest glam-rockers, the World’s Most Lovely Man who chose tortured sainthood, pop’s preening popinjay who reinvented ...

Founding fathers of technopop come together in electro land ...

David Sylvian: Everything And Nothing

So, David Sylvian, you live halfway up a mountain in New England?"That's the way it is", laughs the singer (and yes, he does laugh. Asked ...