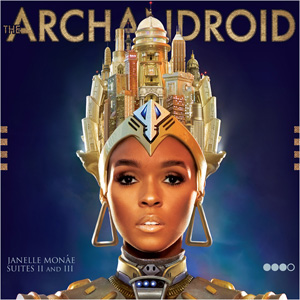 Report and Interview by Chris Campion, The Observer, 14 June 2009

Introducing this month's hottest talent, the android-loving future of R&B. ...

Janelle Monáe: Sister From Another Planet

Janelle Monáe: Postbahnhof, Berlin — Not The Archandroid We're Looking For

Janelle Monáe's got it all, so why do we need any more? Wyndham Wallace reports from her recent Berlin show… ...

THE FIRST RULE for writers – apply seat of pants to chair – works for musicians, too. Thirty years ago, the hairbrush and the bedroom mirror ...

AN ENNIO MORRICONE SONIC VISTA opens The Electric Lady, the sequel to Janelle Monae's The ArchAndroid, making its ambition obvious. Overture burning off, a tugging ...

Janelle Monáe: Imagining Her Own Future

CINDI MAYWEATHER is the central character in Janelle Monáe's last three recordings: the 2008 EP Metropolis, the 2010 album The ArchAndroid, and this month's album, ...

"JANELLE! MON-ÁE!" yells the Birmingham crowd as the singer is pushed on in a wheelchair, wearing a straitjacket. She leaps up, throwing off the garment ...

"I WILL NOT commit nor will I submit to musical genocide," Gregory Porter sang Saturday afternoon at the 11th annual Summer Spirit Festival.  ...