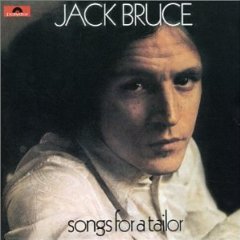 "Jack's always been involved with these terrible bloody all-star bands. But now he's in an ideal position. He's older now and can surround himself with ...

Jack Bruce: I Want To Be A Musician, Not A Pop Star

JACK BRUCE has had a fascinating career. I first saw him in the days when he played with Graham Bond. What a band the Organisation ...

The Heavy Burdens Of Jack’s Shoulders

HIGH COURT Judges have often been heard to observe that pop stars have "grave responsibilities." However, they are usually referring to suspected powers of influence ...

Jack Bruce And His Lifetime

LONDON – It's the universal riff. When some kid in Laguna Beach finally stops driving all the neighbors crazy with it, a kid sitting by ...

JUDGING BY THE weather this week, the title of Saturday's free concert in Hyde Park – "Farewell To Summer" – was a little premature. And ...

JACK BRUCE GOT a bad deal. Following the break-up of Cream Bruce was the only member of the band to emerge with less than "superstar" ...

CREATOR OF one of rock's two most distinctive bass styles (the other being Paul McCartney's), Jack Bruce has, during the course of a long and ...

JACK BRUCE has turned full circle. The best bass guitarist Britain has produced, whose career has merged jazz and rock to the extent where he ...

Jack Bruce: Out of the Storm

JACK BRUCE WAS one of the most outstanding and at the same time least recognized talents to appear on the transatlantic rock scene in the ...

Jack Bruce: Back on Harmony Row

COMBINE CREAM, the Stones, and some avant-garde jazz and you've got this year's talk of the town. ...

Bruce and Taylor's Band of Misfits

LONDON – "I had three choices: give up completely, find a backing group to play my songs mechanically, or become a sideman playing bass in ...

Chris Spedding: This Guitar for Hire

IT SEEMED like the end of an era when we discovered, last week, that Jack Bruce and the Robert Stigwood Organisation have parted company. ...

If you were born November 26, 1968, the day Cream gave its farewell concert at the Royal Albert Hall, let me stand you a legal ...

BBM: Around The Next Dream (Virgin)/Ginger Baker Trio: Going Back Home (Atlantic)

WHOEVER FIRST claimed that guitar, bass and drums are the "three primary colo(u)rs of rock and roll" ignored the possibility that some of us might ...

Retrospective and Interview by Jim Irvin, MOJO, May 1995

Jack Bruce selects the high points of his illustrious career. ...

Back to Bass-ics: Jack Bruce

The bass maestro behind Cream, for several years now a successful solo artist in his own right, looks back on his remarkable career with Joel ...

SEVERAL BLUE moons ago us MOJO contributors were asked to provide the mag with a list of our 30 all-time favourite LPs. My only real ...

Composer and bassist who found early success with Cream and went on to perform as a soloist and with many other artists ...

Sunshine Of Your Love: A Concert For Jack Bruce

IN 2015, A DAY before the first anniversary of his death at the age of 71, an all-star cast of musicians gathered at London's Roundhouse ...