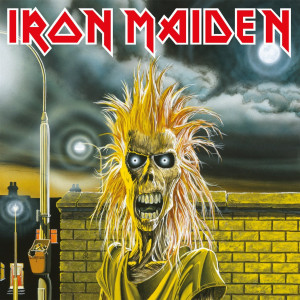 A DREAM. I'm lounging on the balcony of a Beverly Hills hotel staring out over the pool when there's a knock on the door. In ...

The ever-articulate Maiden frontman talks about his early influences, his cynicism towards the rock'n'roll lifestyle, songwriting, the cathartic qualities of heavy metal and...fencing!

From stately homes in Essex to luxury pads in Florida, various members of the Maiden talk about their lives off the road: playing football; drinking real ale, and whether or not they miss their (mostly) London roots.

THE NEW WAVE OF BRITISH HEAVY METAL: FIRST IN AN OCCASIONAL SERIES BY DEAF BARTON ...

HEAVY METAL has been around for as long as I can remember. It grew from the blues and just never died despite years of cold ...

ULP — I can hear them now, sickening snaps echoing throughout the land as HM fans suddenly stop in mid headshake. Ugh, yeah — I ...

The Lustre of Heavy Metal

Mary Harron takes a trip to Sheffield and discovers a surprising rock revival. ...

Iron Maiden: Run For The Pils!

The flanning of Iron Maiden: report by PHILIP BELL ...

BEEN A LONG TIME since the Queensway Hall's played host to such an uncouth, freakin' gang of insuffisticates as the Rods. ...

DREAMS DON'T come true too often so when they do it's worth making a song and dance about them. The Steve Harris story is a ...

THE UNSMILING but unthreatening Iron Maiden are being photographed in the bright white tiled shower room of a compact sports stadium in Offenbach, near Frankfurt ...

Iron Maiden: Unleashed With The Beast

CORPUS CHRISTI lies humid and unhurried under a scorching Texas sun. The shining orb's efforts to reduce the populus to mobile blobs of molten jelly ...

Iron Maiden: What's It All About Eddie?

HEAVY METAL. Now – wait. Before you all go screaming off into the night, crossing yourselves and mouthing prayers to the soul of Michael Jackson, ...

Iron Maiden: When It's Time To Rock...

Somewhere in Yugoslavia, IRON MAIDEN are gearing themselves up for a mammoth assault on the planet's concert stages. SYLVIE SIMMONS braves bolshy Eastern European bureaucrats ...

ON THE opening night of the British leg of their world tour to promote an album called Somewhere In Time, Iron Maiden play like pirates, ...

Welcome To The Machine: Iron Maiden

MUCH AS WE may laugh at the blustering antics of its ambassadors, HM is no joke. As a kind of musical Rollerball, exorcising taboos and ...

NWOBHM: Wave from the Grave

Iron Maiden: No Prayer For The Dying

CONSIDERING THAT Iron Maiden are Britain's most successful homegrown HM act — Def Leppard had to ship out to the States and then return like ...

IN ESSENCE, Iron Maiden are the rock Marmite. Ambivalence is simply not an option when bearing witness to their characteristic onslaught of dense, prog-laced riffage. ...

THERE ARE dead bodies lying on trestle tables in the midst of the tangled scaffolding and controlled chaos that represents Iron Maiden's rear of stage ...

LONG A BYWORD FOR UNCOOL, Iron Maiden are now our biggest musical earners abroad after the Police and ahead of Coldplay. With a Brit in ...

SEEN FROM the stage, an Iron Maiden concert is an ocean of Maiden t-shirts, with thousands of devotees proudly displaying various incarnations of the band's ...