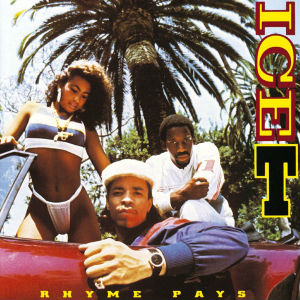 The erstwhile Tracy Marrow talks about acting in movies; his gang roots; pioneering West Coast gangsta rap and telling the truth about black L.A.; still rapping though no longer in the hood; his Body Count thrash-metal band and the Black roots of rock'n'roll; "the intoxicating values of gangs"; white kids listening to rap, and America's need to separate the races.

Ice-T and the Rhyme Syndicate: The Pink Toothbrush, Rayleigh

IS CHIPPING Sodbury in the house? How about Hastings? Is the Crawley posse chilling out tonight? Everybody make some goddam N-O-l-S-E... ER, please? ...

FOR ALL the descriptions of graphic violence, sexism and general anti-establishment stances, Ice-T is a committed moralist at heart. Not for nothing did he portray ...

Ice-T: The Code of Many Colors

ON THE cover of Ice-T's new record, O.G. Original Gangster are two photos. In the first he's wearing a tuxedo, standing against a backdrop of ...

IN WHAT MUST HAVE been a classic, once-in-a-lifetime meeting of the Ts, Ice-T once taught Mr T to rap. You remember Mr T: burly black ...

Power To The Peebles

The success of the visceral New Jack City has made Blaxploitation movies a thing of the past and debuting director MARIO VAN PEEBLES a hot ...

The LOLLAPALOOZA II festival winds its way around America with a bill as exotic as its name. Red Hot Chili Peppers, Ministry and Pearl Jam ...

Ice-T: 'Bring Me The Head of Charlton Heston'

America's most wanted... public enemy one... ICE-T's reputation is just about as real as he wants it to get right now. Ever since the 'Cop ...

In this face to face interview conducted at his home in Beverly Hills, Ice-T talks to Jeff Lorez about the man behind the notorious myth... ...

ICE-T'S FIFTH album – his first post-riot record and, more importantly, his first following the 'Cop Killer' brouhaha and his subsequent departure from Sire – ...

Never at a loss for words, gangsta rapper Ice-T has taken the literary plunge and produced a provocative manifesto, modestly titled The Ice Opinion ...

Ice-T: Seine In The Membrane

It's not all being grim and Malcolm X when you're ICE-T. You also get to go on the road with your mates, play metal and ...

We like ICE-T, rap's renaissance man. He doesn't give a shit ...

Iceberg Slim: The Best-Selling Pimp Remembered By His Widow