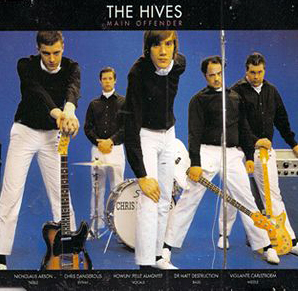 I'M CONVINCED that there's something about Veni Vidi Vicious, that elicits borderline personality. One minute I'm singing its praises to everyone I know (including an ...

The Hives: Modesty is a virtue... but not in a band

Profile and Interview by Simon Price, Independent on Sunday, 27 January 2002

IF YOU'VE BEEN to the cinema recently, you may have choked on your popcorn while being confronted with the sight of Kylie Minogue riding a ...

They're the most stylish band on the planet. They're also one of the most exciting. This is the rise and rise of THE HIVES… ...

THE SCANDINAVIAN rock'n'roll invasion is gathering pace. Indeed, the industry joke that in the past the Vikings came in longboats, but now they're coming back ...

The Hives: The Junction, Cambridge

The Hives put on a fine imitation of garage rock. And the garage is where it would be best appreciated ...

The Hives: Could this cocksure Swedish pop-punk quintet be the new Strokes?

DESPITE THEIR immaculate black-and-white shirt-tie-and-shoes ensemble, Swedish garage-rockers the Hives have a disconcerting habit of stripping in front of strangers. ...

Stronger Than Dirt: The Secret History Of Garage Punk

The Hives: The Return Of Your Old Favourites

The Hives: The Last Samurai?

The natty uniforms and arch humour are still a novelty in Japan. But have The Hives anything more to offer? ...

WHEN THE HIVES broke through here in 2002 with their top 10 compilation album Your New Favourite Band, they appeared exciting and irresistible. ...