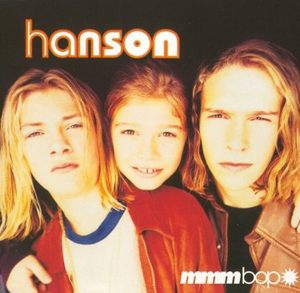 Hanson: The Kids Are All Bright!

Their single is catchier than a cold sore and it's everywhere this summer. America's teen-tastic HANSON leapt straight outta nowhere into the Number One spot ...

'MMMBOP', the debut hit by kiddie trio Hanson that's now warming up Top 40 charts and fourth-grade hearts, sticks in your brain like Trident in ...

The Dust Brothers: Brothers of Invention

They pulled poetry out of Beck. They wrung gold out of Hanson. Now they're remaking the Rolling Stones. Rob Tannenbaum meets the Dust Brothers. ...

Well, we couldn't take them out on the piss all night, could we? We take HANSON to Laser Quest in Reading and zap their little ...

Boys Are for Noise: Hanson Busts Out

LIKE MANY of us, comedian Jay Mohr has a Hanson fixation. "That’s the hottest kid I’ve seen in my life," he said, referring to vocalist ...

HAVING PASSED out during Hanson's historical 1999 Bob Weir summit at the late Wetlands, this critic can attest to the inexorable power of the towhead ...

Profile and Interview by Caroline Sullivan, The Guardian, 4 January 2005

Hanson want to be taken seriously as an alt-rock band. But will anyone forgive their teeny-bop past? By Caroline Sullivan ...

THE YOUNGEST Hanson brother was aged just 11 when the Tulsa trio released the mighty 'Mmmbop' in 1997. Now they've leapt into a kind of ...