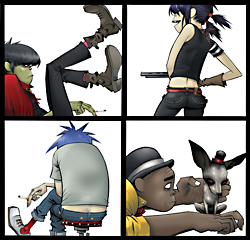 IN ITS TENTH year now, the £20,000 Mercury Music Prize is awarded every September to the best British album. Chosen by a panel of critics, ...

Four years ago Damon Albarn and Jamie Hewlett shared a flat and partied with Spice Girls. Then they invented GORILLAZ. The weed-soaked cartoon collective has ...

Review by Will Hermes, Spin, September 2002

WHO INVENTED the remix? Let P. Diddy debate that one with a posse of royalty-deprived Jamaican dub producers. ...

AS IF IT HADN'T escaped the attention of the Gorillaz co-creator, we're in the Oasis heartlands. And in the city where more than anywhere else ...

THERE ARE GHOSTS at the Apollo. Bobby Byrd holds his master's cape, the amateur night regulars bawl, shimmy and shake, and Fats Gonder asks "are ...

Report and Interview by Andrew Purcell, The Independent, 12 April 2008

THERE ARE GHOSTS at the Apollo. Bobby Byrd holds his master's cape, the amateur night regulars bawl and shimmy, and Fats Gonder asks: "Are you ...

Damon Albarn: From Pop to Opera

He's indifferent to money and drugs. He hates the celebrity circus. And he famously said no to Tony Blair – but yes to getting drunk ...

Gorillaz Get Serious: Plastic Beach loads up on guest stars and gravitas ...

Monkey see, monkey do, monkey tour: the Gorillaz are back

"I SAY! They're fancy!" exclaims Jamie Hewlett when Damon Albarn strides into the pair's West London headquarters. The object of his fascination? Albarn, his sidekick ...

THINK OF BLUR'S Damon Albarn and one thinks of Britpop, which is rather unfair, given that he's spent the last fifteen years working on projects ...

WHAT THE HELL were Gorillaz? A pop curio, maybe? Hindsight suggests they were crucial in determining the shape of British pop in the millennium. Gorillaz ...