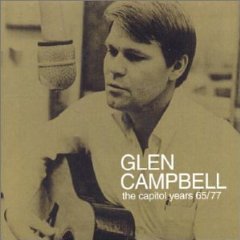 Albums from the Beach Boys, Bobby Vee, Glen Campbell and the Byrds

AFTER BATHING AT BAXTERS (RCA) Jefferson Airplane. 'Ballad of You Me and Poohneil', 'The War is Over', 'Saturday Afternoon', plus nine other tracks. ...

Glen Campbell: The Wichita Lineman is On The Line

"JIMMY WEBB," explained smooth voiced Glen Campbell, somewhere south of Wichita, but still on the line, "is a likeable easy going country boy. One of ...

IT MAY NOT be generally known that Glen Campbell is a former member of the Beach Boys... that he was once a brilliant session guitarist ...

Glen Campbell Adds To His Star Status In Carnegie Recital ...

"HANG ON tight," said the man in the next seat on the Western Airlines jet. "Landings in Las Vegas are the roughest in the world." ...

GLEN CAMPBELL, due in Britain next week for a major tour, and with a new album, Reunion, recorded with Jim Webb, talks to Harvey Kubernik ...

ALTHOUGH GLEN CAMPBELL has always insisted that he's a country boy who sings--not a country singer, he arrived at a time when country music was ...

Profile and Interview by David Bennun, The Guardian, 2000

Inspired by Johnny Cash with his ring of fire, a slew of ageing crooners are pursuing their desires ...

IF SOMEONE HAD told the 15-year-old Elaine that one weekend in the future she'd see both Cliff Richard and Glen Campbell in concert, she'd have ...

IT WAS 64 DEGREES in Manhattan Saturday afternoon, the world had taken a turn for the milder and, though it was the dead of winter, spring ...

Kate Mossman on extreme pop tourism: who would fly 5,000 miles for a gig?