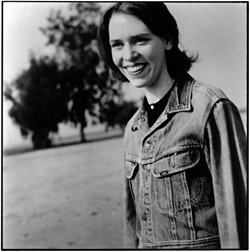 The Queen of nouveau bluegrass, Gillian Welch, and her guitar pickin' sidekick David Rawlings, talk about meeting at Berklee, making the fabulous Revival album, living in Nashville and more.

DETACH YOURSELF for a moment, and this here is a pretty rum scene. ...

Gillian Welch: As Real And As Raw As It Gets

Profile and Interview by Mark Cooper, The Independent, 7 June 1997

THERE OUGHT to be a genre name for the other kind of art-rock — music that includes all the ridiculously extreme stuff, all the stuff ...

ALL THINGS considered, the chilly, windswept environs of Aberdeen are probably not the best place to start your UK tour. At this remove from the ...

The Cost of Music

"EVERYTHING IS free now," sings Gillian Welch. "That's what they say/Everything I ever done/ Gotta give it away." There is resignation in her voice. Though ...

GILLIAN WELCH, with her hard 'G', is indisputably a Good Thing. Tall and gawky, decidedly non-photogenic, Gillian gives hope to all of us who contend ...

Gillian Welch: The Girl With No Name

Profile and Interview by Toby Manning, The Word, August 2003

The fastest-rising folk singer of her generation is an urban college girl writing spare, soulful country tunes set in a bygone America. Her natural mother ...

Gillian Welch: A Kind Of Bluegrass

Don't be fooled by her old-time country music and rural folk imagery. Gillian Welch is no mountain girl… ...

GILLIAN COULD HAVE COME DOWN from the mountains after Oh Brother and made the step into the wind that would have carried her to prosperity. ...

Soul-searching partners on a trip to Dreamland ...

"WE LOVE PLAYING HERE," Gillian Welch told us more than once, and since she and her musical soulmate David Rawlings were on for more than ...

FOR SOMEONE WHOSE stark songs sound like they have come from the impoverished rural underbelly of Depression-era America, Gillian Welch seems as lively as a ...

Reissues of first three albums by the high priestess of "American Primitive" and partner David Rawlings. ...

Dave Rawlings Machine: A Friend of a Friend

ANYONE WHO EVER felt that David Rawlings hid his light under Gillian Welch's bushel – never getting the full credit he merited as her partner ...

THE ACHING melancholia of Gillian Welch's songs about struggle is only partially balanced by the sprightly, lyrical playing of her immensely skilled guitarist and partner ...

"THIS IS A SONG of hope and optimism," announced David Rawlings, some dozen or so tunes into tonight's set. "They think you're joking," came the ...

MOBILE PHONES, don't you just hate them? I know that to most of the Earth's populace they're as essential as a limb these days, but ...

THE ARRIVAL OF A new record from Gillian Welch and her partner Dave Rawlings is an eagerly anticipated event at Just Backdated. ...