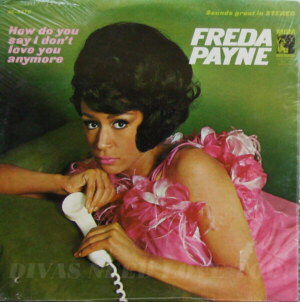 Eddie Holland: A Musical Magician, Once of Motown, Bidding for His Own 'Detroit Sound'

Yes, Holland-Dozier-Holland DID Split with the Giant; Yes, Eddie Holland DID form Invictus Records; Yes, Invictus IS Climbing the Charts ...

Freda Payne: In Pursuit of Superstardom

From the Art Institute to Joe Louis To Duke Ellington to the Carson Show ...

Freda Payne: The Story Behind Band Of Gold

"THAT'S REALLY funny, because I was only talking to the office yesterday asking if 'Band Of Gold' had made any charts overseas – especially Britain". ...

The Heart and Soul of Freda Payne

WITHOUT A DOUBT, the most exciting and worthwhile 'new' discovery of 1970 was Freda Payne. Exciting because she is just that; worthwhile because she will ...

FREDA PAYNE looks all set to repeat her success of last year with her new record. Her ambitions, however, are in another direction... ...

IT'S NOT been all peaches and cream for Freda Payne since she had a worldwide hit with 'Band Of Gold'. As she says: "Until recently ...

THE STYLISTICS came onstage around midnight and, judging by the yawns on many people's faces, it wasn't a moment too soon. London's Cunard International Hotel ...

ACCORDING to the lovely lady herself, "the public is just getting re-acquainted with Freda Payne!" and if her latest album on A.B.C. is anything to ...

"Success can be the emptiest place in the world," says Freda..."Having a husband and now a son makes me realise just how empty my life ...

Freda Payne Talks All That Jazz

Retrospective and Interview by Michael A. Gonzales, Ebony, 11 August 2014

Vintage visionary Michael A. Gonzales checks in with the former EBONY/JET cover star's return to the singing stage. ...