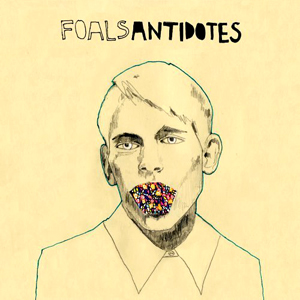 The Foals frontperson talks about the band's latest album What Went Down: the progression from previous album Holy Fire; writing in Oxford but living in London; being pushed by producer James Ford; his songwriting progress; songs like 'Mountain at my Gates' and 'Knife in the Ocean'; wanting to tour again... and after which he's photographed by his interviewer.

YOU HAVE TO rewind the best part of a year to find the root of the expansive bubble of anticipation that's bloated about the five ...

Bodies jerk and brains overheat down at the intellectual disco. ...

BACK IN FEBRUARY, one DiS messageboarder was moved to say to the masses: "I challenge you to prove to me that math-rock is real". Responses ...

Foals: "I built a fortress around myself"

Report and Interview by Dave Simpson, The Guardian, 6 May 2010

IN AN AMSTERDAM square, tourists all around, Yannis Philippakis is pouring his heart out. The singer of Foals is describing how he has kept a ...

Foals' Yannis Philippakis: Getting on his highbrow horse

There's a lot going on in the mind of Foals frontman Yannis Philippakis – Metro finds out more. ...

Interview by Scott McLennan, Rip It Up (Australia), January 2013

As the promotion for Foals' third album Holy Fire ramps up, it's become apparent from press shots there's a notable new addition to the Oxford ...

The once-spindly art-rockers have made a full transformation to a thrillingly spontaneous pop group capable of reigning over arenas. ...

This is a transcript of Pip's audio interview with Yannis. Hear it here. ...

FOALS' SUCCESS has seen them circle the globe, restlessly switching producers to find the perfect sound. All it took was time, says Tom Doyle. ...

Ahead of their fifth album, Yannis Philippakis and co. blend the avant garde with football-terrace energy. ...

Foals: Everything Not Saved Will Be Lost Part I

Foals have found a new zip to their grooves: this is a fitting soundtrack for a world mired in uncertainty ...