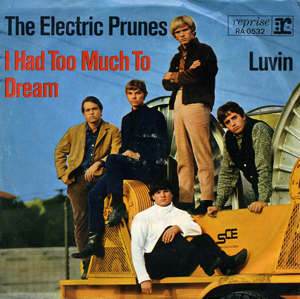 Putting Electricity into the Electric Prunes

THE Electric Prunes landed in Britain from the States last week to recharge the British club circuit with electricity — from natural sources. ...

Albums from Judy Collins and the Electric Prunes

SANTA MONICA — The audience was a show in themselves. Long satin dresses, ringlet curls, rahja jackets and brightly colored blouses dominated the scene. For ...

The Electric Prunes: 'I Had Too Much To Dream (Last Night)'

From the "mind-expanding" opening to the screaming-droning guitars to the '(I Can't Get No) Satisfaction'-derived drums, The Electric Prunes' 'I Had Too Much To Dream ...

The Electric Prunes: Too Much To Dream

FROM THE "mind-expanding" flight of the 2,000-pound bumblebee opening to the liquid, screaming, droning guitars to the '(I Can't Get No) Satisfaction'-derived drums, the Electric ...

California Dreamin': The Electric Prunes: Too Much To Dream (Rhino) ***

They trod an awkward career path, says Mark Paytress, but The Electric Prunes had moments of proto-psych wizardry. ...

The latest in the Nuggets franchise documents the most fertile few years in southern Californian music history, taking in curios, weirdos, hipsters, freaks and a ...