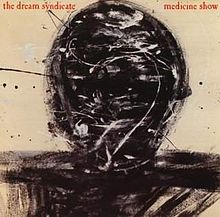 The ex-Dream Syndicate frontman looks back fondly at the Paisley Underground; being on tour for many years; his new album My Midnight; his side project Gutterball; on singers and singing, and guitars and guitar playing; songwriting; his move to New York, and being revered by a new generation of artists.

The Dream Syndicate: The Days of Wine and Roses (Ruby Records, Produced by Chris D)

THE DREAM Syndicate has never had to struggle for a personal sound, even though their music is often like a wild river, flowing with ripples ...

LOS ANGELES — Steve Wynn is getting a little tired of having Dream Syndicate, the LA band for whom he writes, plays guitar and sings, ...

The Dream Syndicate: The Days Of Wine And Roses

I HOLD IN MY HAND promo material an inch thick containing innumerable denials from this hot band, L.A'.s Dream Syndicate, on how they do not ...

"WE PLAYED THE Mudd Club in New York, and we went on at 2 or 3 in the morning. I was amazed that people were ...

WHAT'S THE best way to judge a band like the Dream Syndicate? On one hand, they're a lean, hard-charging attack force, with plenty of swell ...

IT'S A HUMID 100 degrees and smoggy in Hollywood. Yet there we are, Dream Syndicate vocalist-writer Steve Wynn and I, sitting in Steve's parked car ...

INSIDE THE Mission Theatre in sunny Santa Barbara we’ve got trouble. With less than an hour to go before The Dreams Syndicate take the stage, ...

WELL, IT was fun while it lasted. In 1982, the Dream Syndicate put out Days Of Wine And Roses, a silly-ass tribute to the feeling ...

The Defiant One: Steve Wynn

Report and Interview by Fred Mills, Seattle Weekly, 28 May 2003

After ushering in a double disc of Miracles with his last album, underground icon Steve Wynn explores his troubled soul on the new Static Transmission. ...

Bad medicine! The dark lords of the Paisley Underground revisited. ...