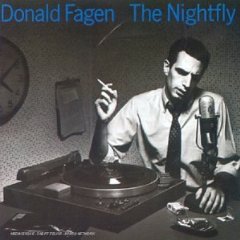 DONALD FAGEN'S first album in 11 years, Kamakiriad, can be judged from two different perspectives. On the one hand, it marries tartly ironic lyrics with ...

The former Dan man talks about the New York Rock & Soul Revue; Steely Dan's influence on UK groups; the serious process of recording Dan albums; his forthcoming album Kamakiriad; The Nightfly, 'IGY' and "mock sentimentality"; writer's block and psychotherapy; Walter Becker's drug problem, and being reunited with him; his childhood, his parents and Jewishness; meeting Walter at Bard College; on '60s soul; on Prince, hip hop, and De La Soul sampling 'Peg', and on the Dan members, and catalogue reissues.

On making Kamakiriad, NYC versus LA, favourite grooves and favourite rhythm sections, working by himself and looking back on Steely Dan

After the release of The Nightfly, Donald Fagen visited the U.K. to promote it, and one of the few "interviews" he permitted was with Charlie ...

AHEM. WHERE were we? Steely Dan go out on the worst album of their entire career, Walter Becker gets involved in one of those stupidly ...

"LACK OF IRONY," says Donald Fagen with a wry grin, "is not exactly my specialty." It's an odd apology – more like a boast – ...

Donald Fagen: A Nightfly Up Against The Wall

DESPITE WHATEVER initial impressions you might get from hearing it on the radio, this is not the new Steely Dan album minus an apparently expendable ...

No, there won't be a Steely Dan reunion. But the good news for those still checked in at the Hotel California is that songwriting partners ...

Donald Fagen: Return of the Nightfly

Steely Dan co-creator Donald Fagen resurfaces after nearly a decade of silence, with new works and a new outlook on life. ...

Donald Fagen: Reeling In The Years

NOT BEFORE time, the man who did it again is doing it again. But, after nine years of soundtrack credits and precious little else, muffled ...

Donald Fagen: Get Your Motor Running

With Kamakiriad, Donald Fagen proves that behind every great album is a great car ...

Fagen and Becker on Kamakiriad

IN A WAY, the ID Donald Fagen did for New York's WNEW-FM, arguably the best album rock station in a city with little choice in ...

Interview by Simon Reynolds, The Observer, 9 May 1993

With their jazz-tinged soft-rock and mordant lyrics, Steely Dan were critics' favourites and a staple of FM radio throughout the Seventies. ...

Back in the '70s, Steely Dan grabbed the American Dream by the throat with their deceptively soft rock. Now singer Donald Fagen is back, giving ...

ELEVEN years between albums is excessive, even by living-legend standards. For some pop performers, that's time enough to get discovered, be the next big thing, ...

Donald Fagen: Back To Bed For Another 11 Years Then

VARIOUSLY JET-LAGGED and eyeing each other guardedly from behind their paper plates and coffee cups, half a dozen representatives of the world's rock press settle ...

KAMAKIRIAD (Japanese for "insect" but used in this case as a futuristic steam-driven car with its own vegetable garden) tells of a journey, as much ...

BEYOND THE STEELY DOME ...

Donald Fagen: The Man Who Came In From The Cool

Steely Dan were the muso's band. As icily astute chroniclers of the Seventies, Donald Fagen and Walter Becker recorded a series of virtuoso albums of ...

Donald Fagen: The Cat Will See You Now

First there was The Nightfly. Then Kamakiriad. And now, a mere 24 years on, the trilogy is complete. Robert Sandall meets Steely Dan's Donald Fagen ...

HOW DO YOU write a song about homeland security without sounding preachy or trite? On the other hand, how do you make honest music in ...

IN THE BRUTAL world of American football, teams often employ what they call a "hurry-up offense", a series of plays they can run quickly when ...

YOU KNOW WHAT Van Morrison, David Gilmour, Ray Davies and Donald Fagen have in common, besides their royal rank in rock geezerdom? They have new ...

AT THE END OF 1980'S GAUCHO you'll find Steely Dan's best song — the slow fade of Johnny, the protagonist of 'Third World Man'. The ...

Sly and sardonic new songs from the Steely Dan veteran ...

MORPH THE CAT, the final volume of Donald Fagen's Nightfly trilogy, which appeared in 2006, is introspective and jittery, reflecting the cumulative impact of 9/11 ...

AT THE KEYBOARDS, Donald Fagen was the smoky voice and songwriting co-conspirator (with Walter Becker) on all of Steely Dan's classic hits, from 'Reelin' In ...

Nostalgia and The Nightfly: Good Times Never Seemed So Good (or Real) as on Donald Fagen's First Solo Set

SUNKEN CONDOS: it's an eerie image; all our iPads, Audi TTs and bubble money submerged like Debussy's piano prelude 'La Cathedrale Engloutie'. So too our ...

Here's Donald Fagen in New York to discuss his latest solo album, Sunken Condos. "It's a metaphor for my current phase of life," the 64-year-old ...

IN JANUARY 1974, Joni Mitchell released the exquisite, deceptively sunny Court and Spark; two months later, on the penultimate day of March, the Ramones played their ...