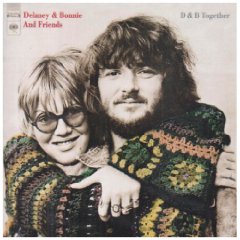 In Detroit Debut at Olympia, Pop Pantheon's Blind Faith is 'Nothing Really Special' ...

THEY'RE POLITE but friendly, quiet but demonstrative, artistic but businesslike, talented — but talented. ...

Delaney & Bonnie: Out Of The South Comes 'The Best Band In The World'

WHEN A TOP musician becomes an unpaid press and public relations man for a group, it can be fairly assumed that the group must have ...

Delaney & Bonnie: Clapton, Jagger, Harrison and Lennon Rave Over Them

THE ALBUM that Apple wanted to get so much because George liked them so much and so for that matter did Derek Taylor which might ...

Update, 2019. IN THEIR short time between 1969 and 1972, Delaney and Bonnie were glorious, for their quality, knowledge, and expressed love and joy of ...

FROM THIS week's flood of albums come a few disappointing second LP's by some promising performers, a pleasant surprise from a talented newcomer, an outstanding ...

AND A GOOD TIME was had by all at London's Royal Albert Hall on Monday. It was the first British appearance of Delaney & Bonnie ...

Eric Clapton: God is a Guitarist

Report and Interview by Philip Norman, The Sunday Times, 1970

GEORGE HARRISON sat with a painfully thin fellow in a motorway restaurant, a graveyard of the digestion outside London. ...

NEW YORK – They weren't welcomed at the airport by hordes of screaming, pushing teenagers. They didn't receive a standing ovation at the Fillmore East ...

DELANEY, BONNIE and Friends from the southern half of these here United States are home grown and home sown but they had to travel to ...

GUITARIST DUANE Allman, moving with agility, skill and taste from bottleneck to feedback, was probably the Friend who fitted best into the D&B format at ...

SOME PERFORMERS strain through prolonged public growing pains on their way to artistic maturity. Others simply appear with all their faculties fully intact. ...

The Axis of Delaney and Bonnie

TAKE TWO PARTS post-Blonde on Blonde neo-folkie sensibility, stir in one part Aretha Franklin Gospel spirit, sprinkle in a few pinches of an attitude that ...