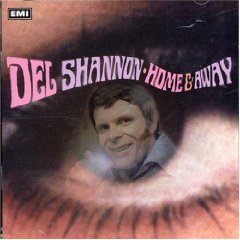 The 'Runaway' man on the trials and tribulations of being a still-creative musician on the "oldies" circuit; songwriting; working with Jeff Lynne, Tom Petty and Dave Edmunds; and his insecurities and struggle with alcohol.

Del Shannon: A year ago he was just a G.I.

BY NOW, mix-ups seem to be an integral pact of DEL SHANNON'S recording career. ...

Dion And Buzz Have a Swinging Day in Britain

THE 'RUNAWAY' SINGER WANTS TO SEE SOME FOOTBALL ...

DEL SHANNON, fast becoming a contender for the "Mr. Consistency" department of pop, took time off from a session on his new L.P. to scatter ...

Del Loves England, But It Hurts His Pocket

Del And Roy Hope To Tour Here Again — But Together

ROY ORBISON and Del Shannon have formed a mutual admiration society! More than anything, these two American stars would love to make a British tour ...

Del Shannon: A Great Tour But Del's Happy To Be Home

DEL SHANNON gulped down a bottle of coke, lit a cigar and leaned back in his leather upholstered chair. On his last night in England, ...

Del Shannon, Back in the Charts With 'Two Silhouettes', Says... I Won't Come to Britain Too Often

DEL SHANNON'S back in the charts with 'Two Silhouettes' — a number he chose while he was in Surrey on his last British trip! ...

Del Shannon on The British Scene

PETER JONES TALKS TO DEL SHANNON AND GETS SOME INTERESTING VIEWS ...

ONE OF THE chief attractions about Del Shannon is his own individual style of singing and guitar playing. So it'll come as a shock to ...

The Unseen Side of Del Shannon

THE IMAGE of Del Shannon is probably one of the most one-sided in the business. The man who in the last four years has built ...

FREAK OUTS forget — it's rock riots yet! Those smashing days of the fifties are back, and for evidence see the pile of broken seats ...

The Return of the 'Runaway' Man: Del Shannon

COMEBACKS ARE becoming as common as oldies these days. When you think about it, rock & roll has been around some twenty years now, with ...

THEY'RE ALL COMING back. Sedaka, Anka and Vinton hit the top of the charts again, but you all know that story backwards and forwards. Almost ...

"THERE WAS A girl I thought was really in love with me. I mean, my heart would pound when she came around. She gave me ...

THE SPACE inside our souls where real dreams arise is created by a particular breed of gambler: the emotional, sexually aware, desperately honest human who ...

Del Shannon: Pop Before the Beatles

THE APPARENT suicide of Del Shannon at his home in California puts the final tragic twist to a story which began well with a string ...

THE MOST tragic thing would be for Del Shannon to be lumped with, as he sometimes was in the past, all the Bobbys and Frankies ...

Eight CDs tell the story of one of the '60s' most original rockers, a doomed romantic whose arrested adolescence made him a star but never ...

Del Shannon on Tom Petty and Drop Down and Get Me