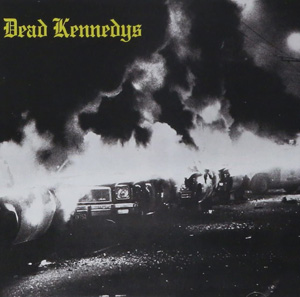 Messrs. Biafra and Flouride discuss the differences between punk and new wave; talk about fellow Californians Flipper, D.O.A. and Black Flag; decry Nazi punks; talk about friend and ally Christian Lunch, as well as about Hüsker Dü and the Residents; mock the Plasmatics and Adam & the Ants... and declare their mission to civilize America.

SOME PEOPLE join a band to get out of the crowd. Jello Biafra, I'm convinced, joined the Dead Kennedys to guarantee a space in the ...

SPOT THE DIFFERENCEStudy these two pictures carefully. At first sight they may seem identical, but there are at least twelve small but significant differences between ...

Dead Kennedys: A Talent To Annoy

"I JUST couldn't believe it. I just kinda stood there with a blank stare on my face, thinking oh God — it really happened!" ...

THIS IS THE hardcore faction. Spiked hair, leather jackets, the backs emblazoned with the logos of Crass, UK Subs, Adam & The Ants. Hordes of ...

CHANCES ARE you have an opinion about the Dead Kennedys even if you've never heard their music. Provocation is the name of the game; a ...

IT'S AMUSING TO SEE just how much Oi/punk inevitably rides the rails of the trad rock curve on its way to hell and bucks. This ...

THE Circle Jerks and Dead Kennedys are two of a handfulla bands surviving in name and form from the first three waves of California-style pre-hardcore ...

Sure, the Dead Kennedys are offensive, but obscene? It must be Jello, because jam don't shock like that. ...

Catching Up With Jello Biafra

HARDCORE, FAST-shit guitar or cranked-up pub rock has glued some fairly diverse personalities onto the cranium over the years, from the cretinous dullard through to ...

Back in 1985, one seemingly harmless song led a woman to take unprecedented action against the American recording industry. Thanks to her moral crusade, albums ...

Highway to Hell: My Life on the Road with the Dead Kennedys

IN 1981, I MOVED back to New York City after spending four years in San Francisco. I was 22, and a childhood friend and I ...