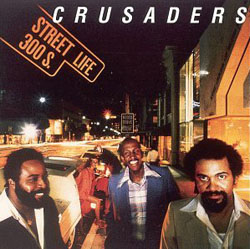 The Crusaders: Crusaders Have Their Fingers On The Pulse Of Crossover Potential

Since dropping the 'Jazz' tag from their name, the group have made their mark in many musical areas. David Nathan talks to drummer Stix Hooper... ...

THE HELL WITH it, let's be dogmatic and lay down a truth that was already manifest before their historic visit. When it comes to pumping ...

THE CRUSADERS simply blew London away with their third gig at the New Victoria. Later conversations with the band proved that they also regarded ...

After a Quarter of a Century, Yes, It’s Overnight Success

Yup, it's taken a little time. Uhhuh, that's right – 25 years of bein' hot stuff. But for THE CRUSADERS worldwide acceptance does at last ...

The Crusaders: 26 Years Young And The Best Is Yet To Come

'Tis strange to think that the Crusaders were laying down their distinctive sounds before some of their fans were even a twinkle in their daddies' ...

ON STAGE, as on record, The Crusaders an elusive synthesis of assorted musical elements which, although generally bonded in a cohesive sound that is unmistakably ...

B&S catches up with the Crusaders who have campaigned for jazz all over the world and whose new album is centred around 'street life'... ...

The Crusaders: In Their Prime

With 25 successful and productive years already accomplished, the Crusaders have only just begun! Drummer, Stix Hooper explains their formula for success and longevity, and ...

IT'S THE MID-1950s in Houston, Texas, east of Galveston Bay and west of the River Colorado, and some of the local folks are having themselves ...