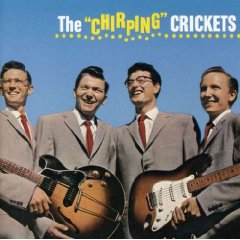 From Buddy Holly to the Clash: songwriter/guitarist Curtis talks about his time with Holly and his lengthy association with the Crickets; the number of mistakes in the movie The Buddy Holly Story; backing the Everly Brothers, plus their cover of his 'Walk Right Back'; writing 'I Fought The Law', the mystery of Bobby Fuller's death, and the Clash's version of his most famous song; hanging out with Eric Clapton; writing The Mary Tyler Moore Show theme tune, and jingles; his lengthy association with Waylon Jennings, and his return to Nashville.

Crickets May Have To Tour Without Jerry Allison

JERRY ALLISON, longest-serving member of the Crickets, whose 'Don't Ever Change' is still climbing our Top Twenty, may not be able to get to England ...

The Crickets, The Rivingtons, Gene McDaniels: Liberty Chief Was Surprised By Crickets' Hit!

DO YOU LIKE a real, bluesy, earthy, down-south American sound? If you do, then your ears will flap when you listen to 'Papa-Oom-Mow-Mow', a new ...

THE SUCCESS of Frank Ifield in America has really converted Bobby Vee to country and western music! "I had no idea that C and W ...

The Crickets: Our first tour and we're glad it's in England

I'VE JUST received a nine page letter from the Crickets, who arrive tomorrow (Friday) for their tour with Bobby Vee, which opens on November 3, ...

The Crickets: Back In Style

BUDDY HOLLY SO overshadowed The Crickets that one tends to forget that they went on to produce some very creditable work on their own after ...

IT WASN'T AN ORIGINAL name; there was another group called the Crickets that had dented the Rhythm 'n' Blues charts a few years earlier, but ...