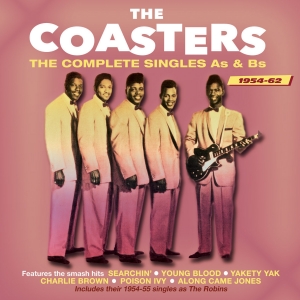 Eleven Years of Coastin’: The Coasters

Several years ago The Coasters were internationally known and much has been written about them. Whilst I do not wish to regurgitate facts that are ...

Cornelius, Bobby and Nathaniel took the stand around 11 p.m. and those unacquainted with the team could be excused for thinking that they were about ...

TOM DOWD is a walking encyclopedia on the history of American pop music. In fact, Tom Dowd created twenty years of pop history since he ...

THERE IS A passage in the Coasters' 'Sweet Georgia Brown' where the lead baritone flies off on the immortal line "she gotta walk that make ...

IN 1967, ARETHA Franklin moved from Columbia to Atlantic – in what soon proved to be one of the most important moments in the history ...

HOW CRUEL fate is. At the very moment that Jerry Leiber and Mike Stoller are proving themselves to be perfectly tuned in to 1973, with ...

Behind The Sun: New Orleans

IT HARDLY SEEMED three years ago that Robin Gosden and myself were making the same journey from his Weybridge home to Heathrow Airport. Nothing had ...

The Coasters: At Smokey Joe's Café

Retrospective by Bill Millar, The History of Rock, 1982

The songwriters and producers Jerry Leiber and Mike Stoller developed an unusually adventurous method of recording black singers, using material they often wrote themselves and ...

Singer and founding member of the R&B hitmakers the Coasters. ...