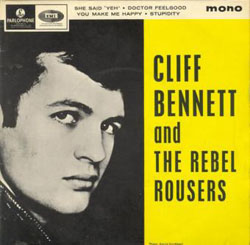 New to You: Cliff Bennett and the Rebel Rousers

THE TIME BOMB WITH THE FOUR YEAR OLD FUSE ...

"A GROUP'S group" is just one of the apt descriptions tagged on to Cliff Bennett and the Rebel Rousers, the highly rated London team just ...

Newcomers to the Charts: Cliff Bennett & the Rebel Rousers

FOR CLIFF Bennett it's seventh record lucky! Cliff has finally made it with 'One Way Love' at No. 29 in the NME Chart. ...

BRAND NEW Searcher Frank Allen described to us some of the excitement he felt on his first worldwide trip with the group shortly before he ...

SO HIGH is the esteem in which Roy Orbison's fans hold him that they made him do an encore of 'Running Scared' and 'Goodnight' at ...

Switched on people are definitely animal lovers, and dogs and cats top the pop stars own hit parade... SYLVIA STEPHEN has done some vetting on the subject. For ...

Spooks, spirits and all sorts of scary things — that's what Hallowe'en is made of. Best way to avoid these frights is to get together with friends and have a party! So that's just what ...

WHENEVER A new album by THE BEATLES goes on the market, we know to expect a flood of cover-version singles from different parts of the ...

CLIFF BENNETT, that well-known Cockney about Uxbridge, has made a welcome return to the NME Chart, courtesy of Lennon and McCartney's 'Got To Get You ...

AS CLIFF Bennett and the Rebel Rousers rocket their way up the NME Charts courtesy of Lennon and McCartney we questioned the leader about his ...

The 'Reach Out, I'll Be There' boys hit town and cause a sensation among the stars and fans at their concert ...