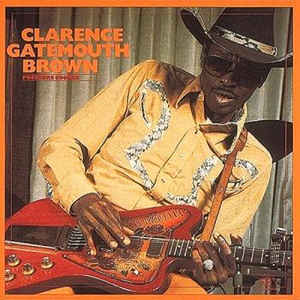 WITH THE emergence of interest in blues recordings after the war, with its resultant popularity, it was only natural that there should be a multitude ...

BIG NICKEL PUBLICATIONS continue their unsurpassed service of providing a mine of information to R&B record collectors with another addition to its catalogue of books, ...

"I STARTED OUT in boogie woogie, went from there into big band jazz and I've just kept stepping on and on," says Gatemouth Brown. He's ...

THIS YEAR is Clarence 'Gatemouth'' Brown's 50th as a recording artist, and virtually everyone is preparing to honor the blues musician. ...

IT IS 10:15 on a Saturday morning, and I am banging on a motel room door in San Juan Capistrano, having driven down from Los ...