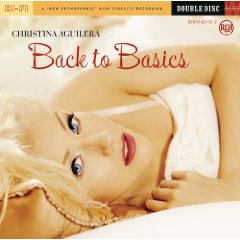 Life in Plastic, It's Fantastic

Who are all these new singers who go straight in at No 1? Caroline Sullivan on the rise of the boil-in-the-bag pop star ...

CURRENTLY TOP of the charts not only in their native Spain but right across Europe and — as of Sunday — in Britain as well, ...

Has Anyone Seen Christina?

Because all we can find is Xtina, with her explosive beats, body piercings and broken glass.  ...

MAKING AN ENTRANCE worthy of Kylie, Christina Aguilera looks stunning. Having reined in her penchant for leather and cleavage and adopted a look inspired by ...

Christina Aguilera: Back To Basics (RCA)

OF COURSE, the downside to success is that all those people who really do know better suddenly become reluctant to say "No". Even when they ...

CHRISTINA AGUILERA'S first album in four years finds the former golden girl of US pop re-emerging into a musical world where Lady GaGa has set ...

Sounding older and more confident than early, effortful works such as 'Genie in Bottle', the singer puts the X in Xtina. ...

ON THE FACE OF IT, Christina Aguilera's fourth studio album offers plenty of intriguing potential new directions, featuring as it does collaborations with the likes ...