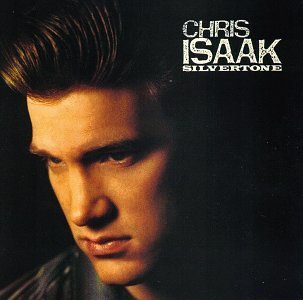 "We're playing the same halls as before, we just get to go on a few hours later." ...

Pre-'Wicked Game', the proto-Americana icon talks about the process of recording; the current state of Jerry Lee Lewis, and his love of vintage rock'n'roll; working as a longshoreman; starting to play, and learning country from his brother; getting his band together; doing videos, and developing his raps; Gene Vincent and Bill Haley; meeting producer and manager Erik Jacobsen; his desire for hit records, and to get into films.

The American icon, together with sidekick Kenney Dale Johnson, spins some favourites and sings a couple of tunes too!

CHRIS ISAAK, whose first album, Silvertone, drew clusters of stars from critics at the Los Angeles Times, The Washington Post and many points in between, ...

Chris Isaak's melancholy songs hark back to the teen ballads of the Sixties, reports Mark Cooper ...

Chris Isaak Has It All Backwards

THREE TEENAGERS stand by the backstage door of the Hollywood Palace. As the sun sets behind them, the kids – two girls and a boy ...

"You can hold yourself back from the suffering of the world: this is something you are free to do and is in accord with your ...

CHRIS ISAAK IS almost too perfect a package. With his iconic, Elvis-meets-Jimmy Dean looks immortalised on an album cover by Bruce Weber, he is a ...

Interview by Roy Trakin, Musician, May 1991

His cult movie roles and haunting balladry made him a star of stage and screen. But the epitome of American Cool still doesn’t know to ...

Chris Isaak is back with a surprisingly angst-ridden album. Give a big hand to the ex-pug with a broken heart. ...

"FEELS GOOD to be back home in London", Chris Isaak shouts, and half the packed Shepherds Bush Empire erupts into a scream. The female half. ...