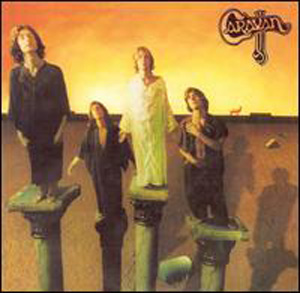 Caravan and That Lot

I REMEMBER the early publicity campaign, a minor masterpiece of hip PR and, it being early 1969 when the 'Underground Group As Pop Stars' syndrome ...

Caravan Do It All Over Again

ONE OF THE more interesting events of last year, away from the resurgence of rock ‘n’ roll in all shapes and sizes, was the first ...

Caravan: Missing Out On Hysteria

YOU CAN almost see the sky through the hazy plastic roof. Richard Sinclair hands around huge pastries stuffed with stringy macro weeds. Guzzling Cokes and ...

NO DOUBT YOU WILL NOTICED the double page ads in the music press extolling the virtues of Caravan and Renaissance, and pointing to their enthusiastic ...

WHERE THE HELL is Lou Reed?Good question, if a trifle academic, but eminently suited for whiling away times in the coach by discussing. ...

WHEN THE members of Caravan pulled down their trousers, bent over, and revealed the name of their last album spelt out on their white English ...

IT'S THE gathering of the Canterbury faithful. The main event is the original — as near as dammit — Caravan line-up. That other former Wilde ...

PUNK'S SCORCHED-EARTH policy towards the past has brought many a musical career to a premature halt. It's no coincidence that veteran progressive rockers Caravan originally ...

see also Hatfield And The North