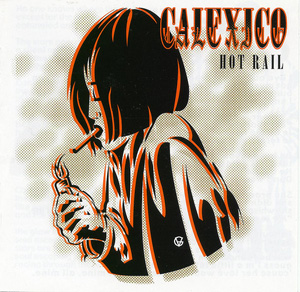 Lambchop THE GREAT AMERICAN Music Hall is an exotic relic in the middle of San Francisco's Tenderloin district. Outside, the streets are full of junkies, hobos ...

TAKE A TWIST of The Wild Bunch and some ghosts from The Alamo, wash down with tequila, then fall asleep on the back porch. That ...

IN MY OLD AGE, I am trying to get hip. So I have temporarily relinquished my inner redneck. Left that twang-and-trash loving gal on the ...

PACKING UP his gear after a recent gig in Dublin, Calexico's Joey Burns was approached by a young couple. Would you play at our wedding? ...

Calexico: World Drifts In: Live At The Barbican

Tucson's finest bring their unique compression of American musical styles to DVD with a London concert recording. DVD ALWAYS RUNS the risk of turning into a ...

Calexico: Edge Of The Sun

Review by Andrew Mueller, Uncut, May 2015

OVER NEARLY twenty years of existence on the fringes of Americana, Calexico have not paid for guitar-shaped swimming pools for their constituent members. But they ...

Calexico: The Thread That Keeps Us

NOW EXPANDED to a full-time septet, Calexico display a new resourcefulness and determination on The Thread That Keeps Us, which may be the album that ...