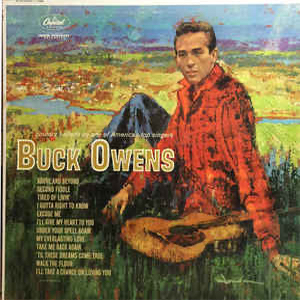 BUCK OWENS is regarded very highly by country-and –western people, performers and customers alike, and his albums sell consistently well. Unfortunately, he has never had ...

"THERE'S SO much prejudice in New York — I think they're afraid of it." The speaker was the country music singer Buck Owens, and the ...

"THERE'S SO much prejudice in New York — I think they're afraid of it." The speaker was the country music singer Buck Owens, and the ...

THE ALBERT HALL isn't the most obvious place to see the Bakersfield Emperor, but it did make for an interesting ambience, with the audience about ...

You Don’t Buck The Rules On The Bus: Buck Owens

IT’S LIKE Tom Wolfe said: you’re either on the bus or you’re off the bus. No three ways about it. ...

Buck Owens: Myths of the honky-tonker

Profile and Interview by David Toop, The Times, 25 March 1989

On the eve of the Wembley country, festival, Buck Owens tells David Toop of the horrors of assembly-line music ...

BUCK WAS ALWAYS the first to put down his Warners output, but you almost have to hear it all in one place to comprehend how ...