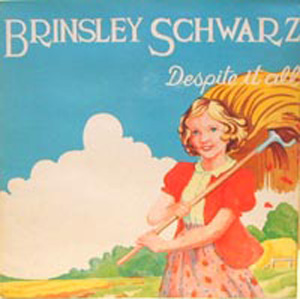 I WAS ON that New York trip last weekend, too. My brief was to listen to the music. I have to report that as soon ...

Brinsley Schwarz: From Kippington Lodge to the Empire State

BRINSLEY SCHWARZ, the band born out of the small time frustrations of Kippington Lodge, are the outfit the whole of the rock media were taken ...

BRINSLEY SCHWARZ is an unknown British group that aroused interest because over 100 U.K. journalists braved a 12-hour trouble beset trip from London to spend ...

Brinsley Schwarz: A Legend Before Their Own Time

LONDON — Eyes moist with tears of humility but with handshakes firm and sincere the publicist and the lawyer and the agent and their coiffured ...

Brinsley Schwarz: Despite It All

THE TITLE apparently refers to the incredible hype this group received when they first played Fillmore East and their management blew $120,000 to fly over ...

THIS CAPTURES much of the easy-going feel that makes this band such an entertaining outfit on stage. Recorded at their home in Northwood, London, the ...

SHADES OF Highway 61 Revisited, Sweetheart of the Rodeo, The Band, The Gilded Palace of Sin, Workingman's Dead were so integral a part of Brinsley ...

WHEN THE J. Geils Band team up with Brinsley Schwarz and Brewer's Droop for a night's rockanroll, you can be sure that you're going to ...

THIS WAS one of the few gigs I can remember where all the acts deserved a full-length review to themselves. The teaming of Reed, Gnidrolog ...

FIRST THE facts: Greasy Truckers are basically two people who wish to be known as Melvin and Fanny Hotrock (We all have our problems, I ...

THE REAL ISSUE HERE is originality. How much does it matter? There are a lot of theories about the true nature of rock and roll, ...

Profile and Interview by Phil Hardy, Let It Rock, November 1972

IT ALL STARTED in Woodbridge, Suffolk, in 1963-4 when Brinsley and Nick Lowe started a school group. Sounds 4 plus 1, playing rather suprisingly for ...

Brinsley Schwarz: Nervous On The Road

NERVOUS ON THE Road continues in typical Brinsley fashion. It's full of jumping good time rock songs, a little rockabilly, a shade of the Band ...

BRINSLEY SCHWARZ are playing nice clean rock 'n' roll these days – but they're wary of getting caught up in that rock 'n' roll machine. ...

God Save The Grateful Dead, Or Someone Like Them

Finally... The World Is Ready For Mick Brown's History Of Hype

IF YOU'RE looking for a definition, forget it. The word is an abbreviation of 'hyperbole', which the dictionary defines as 'rhetorical exaggeration', but in the ...

The Glory That Was Pub Rock

"Before pub rock people used to think the ideal gig was somewhere like Guildford Civic where you could sit cross-legged and watch King Crimson pan ...

Retrospective and Interview by Max Bell, The Independent, 19 September 2004

Once, rock inhabited Eden. Man, Can and Beefheart were its fruit. Then the snakes in suits took over and music biz creatives like Andrew Lauder ...

With a long-overdue album in the shops, Nick Lowe explains his lengthy absence, touches on late fatherhood, bigs up his new songs, and attempts to ...