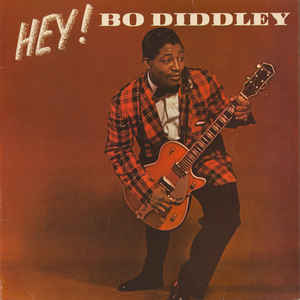 THE WHOLE THING about Bo Diddley was that he was by far the weirdest and craziest musician ever to come out of either blues or ...

The Chicago gunslinger talks about his stage show; about being ahead of his time; about how, influenced by Joe Louis, he avoids being boastful, and his message to the people.

When Bo's not being a boxer, truck driver, gunslinger, lumberjack etc. he's being A Man - a husband and father, dealing with life in the USA. The Gunslinger tells Michael Lydon of record company rip-offs, dealin' with the po-lice and the very meaning of life itself.

The Man With A Hundred Guitars... Diddley the Great

ABOUT EIGHT years ago, a sound called Rock and Roll started to penetrate the music scene in a big big way, taking over completely from ...

ONCE AGAIN, 'Bo Diddley' is a hit — the fourth time it has been in the pop music charts, this time steered there by the ...

Chuck and Bo May Tour Here Together in March

WHAT DO you think of having Chock Berry and Bo Diddley headline a rhythm and blues package in England? Promoter Don Arden, just back from ...

THE AUDIENCE stole the show at London's Saville Theatre on Sunday, presenting their polished performance of Mass Idiocy — the new art form. ...

The tender story of a love-hate relationship ...

The Men Who Make the Blues: Bo Diddley

BO DIDDLEY was born in Mississippi, in or near McComb, on December 30, 1928. Like many bluesmen from the South, he made the journey up ...

The Second Coming Of Bo Diddley

What Have They Done To My Roots, Ma? Chuck Berry and Bo Diddley

Sounds of the Seventies: A Bo Diddley Revival

LAST SUMMER at a Creedence Clearwater Revival concert there was an unannounced special, a warm-up band. Its leader was a middle-aged black man carrying a ...

Hey! Bo Diddley: The Man Whose Sexuality Was Too Much For America

Diddley Freak Charles Shaar Murray, in the presence of the main man... ...

Keep On Rockin': Interview with film director D. A. Pennebaker

KEEP ON ROCKIN' is in town, and so is the rock film revolutionary who created this celluloid spectacle of Bo Diddley, Jerry Lee Lewis, Chuck ...

AFTER THE release of Golden Decade and Got Another Bag Of Tricks, which really put Bo in perspective, Chess undo all their sterling work by ...

Everything I know I taught myself.– Bo Diddley ...

TEN YEARS AGO Britain was set to become the R&B capital of the world. Between 1962 and '67 we were visited by so many legendary ...

THERE ARE some memories we have which are straightforward memories, but then there are other memories which are more like memories of memories and we're ...

That was the title of one of the influential, flamboyant R'n'B man's hits, for you punks too young to remember. But nowadays, believe it or ...

DON'T EXPECT the back-Clash to start here. Since the Clash's smashingly successful Palladium debut, I have had some second thoughts, but none of these contradict ...

This Here's The Review Of Bo Diddley

AND WHAT a delightful pair they made, Bo 'Jesus' Diddley and Ron 'Not Exactly Picasso' Wood. The main difference between them, I suspect, is that ...

IT IS A Monday morning in March, in the coffee shop of a hotel located on Highland, near the Hollywood Bowl. ...

BO DIDDLEY GETS into rap and even whips up tropical flavors on his first major-label release in 20 years, A Man Among Men. But he's ...

Bo Diddley: He's Fighting Mad and Mad That He Has to Fight

Bo Diddley: Godfather Back On The Beat

Profile and Interview by Mark Cooper, Daily Telegraph, 11 May 1996

If guitar rhythms could be copyrighted, Bo Diddley would be a millionaire. As it is Mark Cooper finds him warily hitting the comeback trail again ...

Man Among Men, Guitarist Among Guitarists

YOU KNOW BO Diddley invented that beat, one of the driving forces of rock and roll. You know he had a bunch of seminal ...

TO PARAPHRASE the titles of two of the 20 Bo Diddley nuggets contained on His Best: The Chess 50th Anniversary Collection , you can't judge ...

IT WAS ABOUT half an hour past midnight on a hot and humid Sunday evening in late September when your intrepid Bucketfull team, aided and ...

ELLAS BATES McDaniel, a.k.a. Bo Diddley, has lived the life of a rural squire in North Florida since 1983, when a dentist, making small talk, ...

American pioneer of rock'n'roll who influenced the Beatles and the Rolling Stones ...

Bo Diddley and the Beat Surrender

Bo Diddley has shuffled off, but his trademark rhythm, and his part in the creation of rock'n'roll, will remain. ...