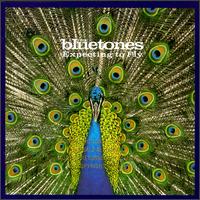 Supergrass, The Bluetones: Caught By The Buzz

Have you heard the new Maker motto? They're On The Cover On Tuesday, They're In The Chart On Sunday! First Portishead, then Sleeper, and now ...

THE BLUETONES have neatly dodged 'new Stone Roses' tags to become the first, and arguably the best, Britpop band from Hounslow. EVERETT TRUE reckons they're the ...

The Bluetones: We Have Lift Off!

When Melody Maker first put THE BLUETONES on the front cover last September, most people wondered who the f*** they were. Now, of course, everybody ...

The Bluetones: Story of the Blues

BRITPOP? NOT THIS YEAR, THANKS. THE NEXT BIG NOISE COMES FROM FOUR UNASSUMING HOUNSLOW LADS WITH NO BANDWAGON TO CATCH. THEY ARE THE BLUETONES AND ...

Review by Caitlin Moran, Select, May 1998

This album contains the immortal line, "Maybe the sky will fall/And maybe kill us all/Or just the very tall". ...

The X-rated Files: The Bluetones

MARK MORRISS lifts up his shirt and winces. It's not a pretty sight – a jumbled wash of red, black and blue, like a colour ...

The Bluetones: Bolt From The Blue

Take one top Rottweiler, introduce it to an indie band, throw in some irresponsible comments about the "dilution of English culture" and await the inevitable ...