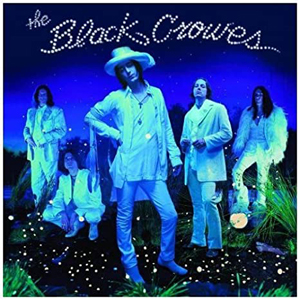 FORBIDDEN PLEASURES ARE GETTING harder to find. What price true rebel music when disco, metal, mid-'70s pop and all the grizzled outlaws of yesteryear are ...

Jimmy Page and the Black Crowes: Live At The Greek (SPV)

Recorded live in October’99, a scorching blues-rock hit-packed double album like they used to make ‘em. ...

Hangin' with Oasis, The Rolling Stones and Plant'n'Page, marriage to Kate Hudson and why they hate Rick Rubin - the Robinson Bros. tell all.

PITY ALCOHOLICS anonymous Dogs D'Amour. The Black Crowes are booked as support act to the Dogs for a string of shows next month, shows which ...

When THE BLACK CROWES went into the studio to record their debut LP their only ambition was to make "a f**king record". Shake Your Money ...

Guilty of making music that was going out of style in 1973. Guilty of flying the tattered flag of rock'n'roll idealism. Guilty, indeed, "of never ...

Currently America's hottest new Faces, The Black Crowes have made a huge name for themselves with just one ass-kickin' LP, mucho slagging off of "the ...

It's late night in Dallas and the Black Crowes are partying in rock's most happening dressing room, an Aladdin's den of fairy lights, Afghan rugs ...

ONE DAY, maybe soon, The Black Crowes will be the biggest rock'n'roll band in Atlanta, Georgia — and following that, the world. Their debut LP ...

THE BLACK Crowes flew almost 12,000 miles to speak to the disfranchised. The 4500 people who crammed into the Atlanta band's single Sydney show were ...

Good Olde Boys: The Black Crowes didn't do it

The point is that, like Richard Hell says, rock'n'roll is an arena in which you re-create yourself, and all this blathering about authenticity is just ...

THE CORRECT ROCK 'N' ROLL ANSWER to society's "What are you rebelling against?" has always been Brando's "Whaddya got?" In this regard, Black Crowes frontman ...

AMORICA, ACCORDING to Chris Robinson, is "somewhere north of hell and south of heaven", a Utopia for the frazzled and the put-upon. Amorica the album ...

MUSIC SEEPS OUT of the streets in Memphis. It's everywhere, in bars and clubs, but also somehow just hanging in the air, almost as if ...

Not Shaven But Raven: The Black Crowes at Newport Centre

WHEN THEY emerged in 1990, it was difficult not to hate the Black Crowes: they were too retro for their own damn good. Led by ...

The Black Crowes: God gave rock'n'roll to them

Report and Interview by David Sinclair, The Times, 20 January 1995

The Black Crowes are not just a rock band; they're claiming their birthright, as lead singer Chris Robinson tells David Sinclair ...

WELCOME TO THE DUDE ranch aka the Royal Albert Hall. Legions of longhairs, clutching their Amorica Or Bust tour posters, strut into the luscious red ...

CHRIS ROBINSON could captain the Deep South Olympics grinning team. Where we see a squat, black-ceilinged closet on the Holloway Road, Chris evidently sees some ...

The Black Crowes: Three Snakes and One Charm

The band's fourth album, recorded over a two-month period in a house in Atlanta. Jack Puig co-produces once again. ...

A DOZEN CRIMSON rugs strewn across a stage; the waft of incense burning sweetly from the monitors; an anaemic band clad only in the finest ...

The Black Crowes: The Garage, London

SOUTHERN ROCK'S masterworks show this century a viable southern heroism: the quest to overcome the dread of Jim Crow and the pall of ruined empire. ...

Black Crowes: By Your Side

THIS ALBUM rocks. And rolls. And nigh on rollicks. Where their last album loped, this one struts. The record it's most like is their 1990 ...

Jesus of Nazareth Chris Robinson ain't. Some detractors drew a purely visual comparison along these lines in recent years, when the Black Crowes' singer/songwriter wore ...

The Black Crowes: By Your Side (Columbia)

Whenever I shoot pool, my first jukebox quarter inevitably goes to 'Hard To Handle' by the Black Crowes, which inspires such grand delusions of well-endowment ...

FOLKS, I'M AS big an enemy of hoary old "rock" and all its many cousins as most anyone I know. I can’t abide Oasis and ...

The Pride of Lions

Their "funky gospel rock" may be out-of-fashion, but the Black Crowes' Chris Robinson is unrepentant. Ernesto de Pascale meets him as he entertains the faithful ...

No irony. No significant changes. No problem! ...

The Black Crowes: The Return of the Fabulous Furry Freak Brothers

After seven years in the wilderness, the Black Crowes, America's freewheelin', dope-smokin', warring Blues Brotherhood are back. And this time their singer Chris Robinson is ...