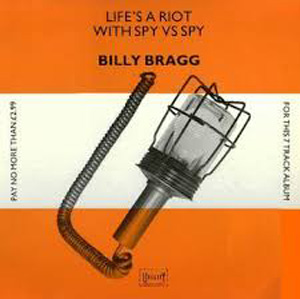 Report and Interview by Mark Sinker, The Observer, 27 November 1988

Art vs. commerce; pop and politics; materialism; the Second World War – the Bard of Barking on all of that and more.

PLACING a heavy burden on a small but genuine talent, Billy Bragg has been hailed as the next big thing. ...

AFTER NEARLY two years of playing the relentless troubadour all around this curious, fragmented isle, Billy Bragg and his guitar are starting to get noticed. ...

OUTSIDE, COPIES of Socialist Youth are on sale and touts are trying to buy tickets because they can resell them for twenty quid to those ...

IT'S ABOUT time to write a deconstructionist regulation sheet to be posted in the halls of rockcritdom. I mean, surely it is so when a ...

"It's no good just complaining in your beer about things — you've got to come out and say it..." So says Spandau Ballet's Gary Kemp. ...

Billy Bragg: Talking With The Taxman About Poetry

SUBTITLED 'THE difficult third album', this is Billy growing into a Big Boy. Decorating the sleeve with Mayakovsky's poem, Bragg takes seriously his role as ...

A HARE-BRAINED afternoon in the warmest room and things are not quite what they seem. The bookshelves may be burdened with Mayakovsky and miner's lamps; ...

Is Billy Bragg Pissing In The Wind Or What?

Peter Jenner Journeys Through The Minefields Of The Rock World

"WHAT DO they know of England who only England know?" enquires Billy Bragg, Bard of Barking. He is quoting, with a tiny adjustment, Rudyard Kipling, ...

Who The Hell Does Billy Bragg Think He Is?

Here he comes again: "pop's political conscience" in his dilapidated trousers and sensible shoes, worthily correcting the unenlightened and uplifting the downtrodden with his unsubtle ...

ON 1988's Worker's Playtime LP, Billy Bragg was "Waiting for the great leap forwards". It's been a long time coming, but he's made that leap, ...

OH DEAR. I am going to marry Billy Bragg. It's like this; Billy and I are in a tacky sort of '50s retro gift shop ...

Only one thing could possibly save us from vicious '80s Conservatism: the assembly of pop pinkos that made up the Labour-supporting Red Wedge organisation. Johnny ...

I Smell the Blood of a Half-Englishman: Billy Bragg

Interview by Geoffrey Himes, Harp, May 2002

What does it mean to be an Englishman? Billy Bragg explains it to Geoffrey Himes. ...

As BILLY BRAGG blows out 50 candles on his birthday cake, TERRY STAUNTON sharpens his pencil for a musical history lesson ...

South by Southwest: Where The Weird Get Going

The freaks were out in force in Austin, Texas, for the South by Southwest festival. Stephen Dalton revels in the music ...

Essay by John Lewis, Do Not Disturb, Summer 2011

How do the British address their cities in song? With bathos, pathos and a large helping of silliness, says John Lewis ...

SXSW: Billy Bragg plays songs from new album, plus one inspired by the Bible

"THE PROBLEM with most protest songs," Billy Bragg said Wednesday afternoon, "is people spend all their time on the protest and not enough on the ...

English national anthem: Is 'Jerusalem' the hymn we've been looking for?

In its 100 years, the hymn 'Jerusalem' has been sung with feeling by those of all political colours, says Peter Silverton. ...