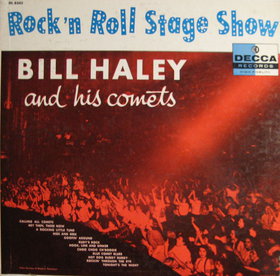 THERE HE WAS, Wild Bill Haley, fifteen years older but not showing a day of it, his spit curl firmly in place on the forehead ...

Bill Haley: A Piece of Gold in my Pocket

CLOSE TO his 50th birthday, Bill Haley seems to be in excellent repair. ...

MARCH 1979, and rock king Bill Haley's in town, almost a quarter of a century since he recorded 'Rock Around The Clock', and 22 years ...

Bill Haley & His Comets: The Decca Years And More

TO A CONTEMPORARY listener already mystified by '50s rock 'n' roll. Bill Haley might be the greatest mystery of all. Elvis's success is easy to ...

It was, as writer Nick Tosches observed, "one of the first instances of a white boy really getting down to the art of hep." ...

Jim Dawson: Rock Around the Clock - The Record that Started the Rock Revolution

DID HOLLYWOOD create rock 'n' roll? That sounds like a strange, ridiculous and even offensive question to anyone who likes rock and all its musical ...

Bill Haley and His Comets: 'Rock Around The Clock'

BILL HALEY was an unlikely pioneer of the rock'n'roll revolution. Even in his pomp he looked like your dad. ...

Retrospective by Bob Stanley, The Guardian, 22 May 2014

The 1950s made stars of Elvis, Little Richard and Fats Domino, but Bill Haley & His Comets are rock'n'roll's forgotten pioneers. ...

IT WAS MY misfortune to see Bill Haley on stage for the first and only time in November 1979, about 15 months before he died, ...