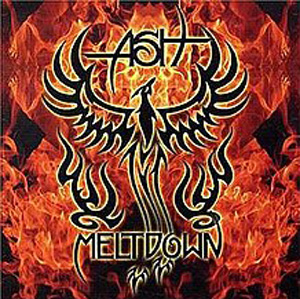 ASH may be fresh-faced teens but they're hardly naïve kids. The Irish striplings are currently the coveted prize in a US bidding war involving such ...

IT'S POURING OFF ME. Pure f***ing rage. See, the enemy isn't hoary rockers. It isn't Britpoppers, soul-sincerity dullards or synthetic chart popsters, although they all ...

These days, most teenagers leave school and sign on. But not ASH – they play loud punk rock, trash hotels and party till they puke. ...

ASH MADE THEIR NAME PLAYING THE SPACEPOP GAME, ROCKETING UP THE CHARTS WITH 'GIRL FROM MARS'. NOW THESE BOYS JUST WANNA MAKE NOISE. MEET THE ...

Ash: Staying Out Of It For The Summer

As the world prepares to get ripped to the tits on cheap cider and mung bean noodle bake at GLASTONBURY, NME indulges in a series ...

U2 and Ash: I was there, helping to make history. (I just wish I hadn't been scratching my chin)

The New, Clear Sounds of Ash

TUCKED AWAY behind a careworn inner city church on a quiet residential street in Highbury, North London, lies an outwardly unremarkable red brick building. This ...

Ash: We Are The Resurrection

The original Bratpoppers, ASH, are back! We meet them in Sweden and hear about Ian Paisley, the nuclear-tastic new album and Charlotte's death-threats ...

Six months in the making, ASH's eagerly-awaited second album, Nu-Clear Sounds, is finally upon us. Today, the band look back on 16 weeks of tap-dancing ...

Did you know Tim's nickname at the scouts was "Timmy Testicle" or that Charlotte guzzles Vodka? We make each member of Ash leave the room ...

Well, Bruce Willis might have spanked Jeremy Irons' butt in the end, but this time the Yanks face a far more serious threat. We join ...

SIXTEEN IS A state of mind that, like that summer feeling, haunts you the rest of your life. It's a quickening of stirrings into one ...

FREE ALL ANGELS finally hits the United States a full year after its release in the U.K., where it's been a huge hit. And fortunately, ...

AH, TEENAGE KICKS. Tim Wheeler may be 25 now, but he still knows that first love, while maybe not the deepest or longest-lasting, is always ...

The Darkness rolled into Newcastle as part of their UK tour. Running out of hairspray: Rahul Shrivastava ...

ASH HAVE BEEN rock stars for 12 years and four albums, yet, as singer Tim Wheeler has noted, they're still younger than some of the ...