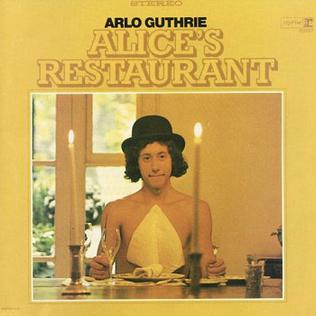 Arlo talks about songwriting and the folk tradition; his memories of his father, Woody Guthrie; on guitar playing; music and politics, and his family's history of Huntington's chorea.

Arlo Guthrie: One Of America's Most Interesting Young Folk Singers For Some Time

PEOPLE WHO go along to hear Woody Guthrie's son, Arlo, during his three week tour of Britain expecting to hear a carbon copy of the ...

WOODY GUTHRIE'S son Arlo is a folk-singer, too. ...

Loraine Alterman on Pop Records: The Shattering Impact of the Doors

THE DOORS, with Jim Morrison singing lead in his urgent, compelling voice, lead you into the strange world of their music after the freaky album ...

HE'S SLIGHT OF build with long hair that hangs almost to his shoulders in curls. At 20, he is an incredible mixture of youth and ...

ALVIN LEE, guitarist-leader of Ten Years After, recently returned from a successful Stateside tour, lent an ear to this week's selection of albums and singles ...

THE FILM of Alice's Restaurant lacks the whimsical outlook that made the LP track of the same name. On the LP, Arlo Guthrie seeks to ...

Update, 2020. Woodstock. The name has many meanings. There's Woodstock the town where Bob Dylan and the Band lived once. But the main resonance is ...

Seeger and Guthrie: A Tradition Continues

WHEN ARLO Guthrie and Pete Seeger performed together at Wolf Trap three summers ago, they managed to convince the sell-out crowd that they weren't really ...

Arlo Guthrie: 'Alice' is Back on the Menu

Report and Interview by Charles Bermant, What's Up, 23 March 2007

'ALICE'S RESTAURANT' is back on the menu. First released in 1967 as the title track of Arlo Guthrie's debut album, the 18-minute talking blues narrative ...