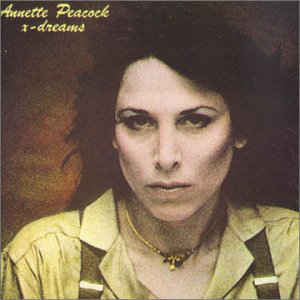 Annette Peacock: I'm the One

THE SUMMER IS probably the best time to go down there, to the far reaches of the west West village. It's really calm, quiet and ...

ANNETTE PEACOCK, erstwhile prisoner in the Bowie/DeFries camp, reveals big plans for what you've all been waiting for... Yes folks, it's THE NEW MUSIC. Here ...

WITH HER first album for six years, Annette Peacock softens the fabric. Glancing curiously and greedily at the rhythms and advantages at the tip of ...

ONE OF THOSE musical experiences devised as a tape-loop for the Pavlov Institute, Pekin, the oddly assorted fare at the Lyceum drew a deservedly tiny ...

"I THINK what happened was, after I left New York all the anger and the toughness and the hostility seemed to dissipate – and in ...

ANNETTE PEACOCK is, I am reliably informed, very well thought of in bohemian circles. This is unsurprising, the surprise being only that her work is ...

Annette Peacock: A British Rail Breakfast With The Artbreak Kid

TIMING: a while ago someone asked Bob Geldof — famous vocalist and composer with the extremely well-known Boomtown Rats pop group — for his definition ...

ANNETTE PEACOCK is a lovely enigma. Once in a while she emerges from obscurity to titillate her panting public with her possibilities and her perversities... ...

Colour Tails: Annette Peacock: I Have No Feelings (Ironic)

NOTHING YOU CAN pin down here. Nothing you safely stick a label on and file for easy access. ...

"IN THE '60s," Annette Peacock vouches, "everyone was an individual. Hendrix, Sly Stone, Dylan, Joplin… If you were of your time, you had to find ...

She's The One: Annette Peacock Interviewed

Annette Peacock is a stone cold original — an innovator, an outlier, authentically sui generis. John Doran talks to her about the timely reissue of ...