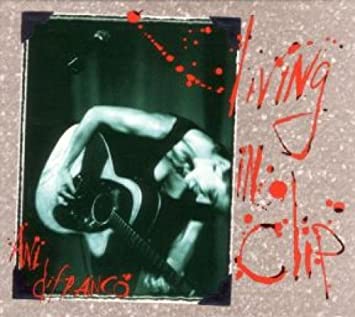 YOU DON'T need stacks of amps to be larger than life, not when you have a persona as outsized as Ani DiFranco's. That's more than ...

THE BARRICADES on the pavement outside Claridges are draped with small girls in big Dr Martins who are gazing at a door. The door is ...

WITHOUT A HINT OF MAINSTREAM chart or media attention over a decade-long career, without a new record to promote and without any discernible music industry ...

AS THE 2002 election results came in, I surfed through 100 cable channels with nothing on and hit an infomercial hosted by John Sebastian for ...

ANI DIFRANCO MAY HAVE EMERGED in the grunge era but she is no slacker. Rejecting all major label blandishments, the politicised US singer-songwriter has self-released ...

MARRIAGE AND MOTHERHOOD have impacted on Ani DiFranco's productivity. Having released 18 albums in as many years, the prodigiously driven and prolific US singer-songwriter has ...

Ani DiFranco: Which Side Are You On?

Interview by Mark Leviton, The Sun Magazine, May 2016

SINGER-SONGWRITER Ani DiFranco doesn't like her music to be labelled. Some have called it "folk-punk," but when asked to define what she does, DiFranco says, ...

"THE IMPORTANT thing in poetry or songwriting is to ignore the facts and tell the truth," says singer-songwriter Ani DiFranco, on the phone from her ...

LIKE A FAVORITE CHAIR, it's easy to take Ani DiFranco for granted. Always there, always as expected, always comfortable/satisfying in her execution, it's easy to ...