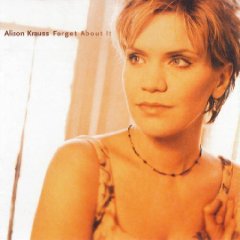 Alison Krauss: A Hit From One of Country's Kinfolk

Bluegrass's most prominent figure makes her way into the Top 10. But even Alison Krauss can't explain it. ...

IT WOULD BE hard to think of two female singers more different than Alison Krauss and Me'Shell Ndegeocello. Krauss, a straight European-American from the Midwestern ...

Alison Krauss: Forget About It

The German immigrant’s daughter from Illinois, who somehow became a bluegrass child prodigy, moves on from purism to pure beauty. ...

First album from Decatur, Illinois' finest since the bluegrass breakthrough of the O Brother, Where Art Thou? soundtrack. ...

Let Me Touch You For A While: Alison Krauss Creates Intimacy Amongst the Disenfranchised

THERE IT WAS ONE DAY – propped against my doorway in West Hollywood – a plain brown cardboard box like so many others. Anonymous. Almost ...

THIS IS KRAUSS'S first studio album for three years, though in the meantime she's delivered a bestselling live album, won three Grammy awards, and made ...

ALISON KRAUSS IS wandering through a meadow, elegantly, if incongruously, attired in a black ballgown, her fingers languorously brushing the tall grass as she sings ...

Now in new hands, Rounder Records looks back after four decades of progressive signings in country, blues and folk. ...

Interview by Kate Mossman, The Word, May 2011

PAPARAZZI CAME to the Baglioni Hotel at Hyde Park Gate this morning to catch Debbie Harry, who's staying in Room Four. They went into bonus ...

IF I WERE TO tell you that Alison Krauss has won more Grammy Awards than any other female artist, and is third on the all-time ...

AMERICANA – as the big tent pitched by the Americana Music Association – is its own conundrum. Drawing an audience that's decidedly 30+, it embraces ...