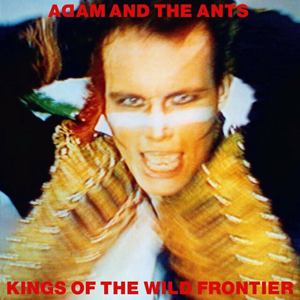 Adam Ant: Metamorphosis of a Narc

"I DON'T THINK I'm an intelligent person. But I think I have a common sense that allows me to have an instinct about what people ...

The foremost Antperson talks about how his time at art school informed his musical life; his changes of style and concept; the realtionship between songs and videos; getting into acting, and acting vs. music; new album Manners & Physique and his interest in the Regency era; working with Kevin Rowland; his punk days, indie label rip-offs, and Derek Jarman's Jubilee movie; and writing with the Ants' Marco Pirroni.

The Dandy Highwayman looks back at his illustrious career, from when he first became Adam, to the fading of thepop star light, including his dealings with Malcolm McLaren; hooking up with Marco Pirroni; starring in Jarman's Jubilee and moving on to the theatrical stage.

"WE ARE not human..." Support band The Ants are bizarre. More at home on Mars than the bondage mag they look like they just fell ...

Adam & The Ants: Whip In My Valise

Whip In My Valise: Adam and the Ants

The angel Gabriel sent me to give you a little bit of sympathy...('Plastic Surgery') ...

X-Ray Spex, Adam & The Ants, The Automatics: The Roundhouse, London

AS MS. POLY'S strychnine air-raid voice shreds the encore and all present, the audience front-line snaps. ...

DIRK MAY well wear white sox but the berk, aka Adam the Grade 'A' ham, wears his pretentions on his sleeve with his hand in ...

ADAM AND The Ants and Throbbing Gristle are shadowy extremes, lurking in dark corners, lethargically scratching through their overscrubbed private parts, grinning sweetly at anyone ...

Ants Out Of Bondage

In which Adam and the Ants reconcile their apparent predilection for S/M with their desire to succeed as musicians without grovelling. PAULO HEWITT passes judgement. ...

Adam & The Ants: Kings Of The Wild Frontier (Epic)

"Malcolm McLaren just said to me, "What do you want, Adam?" I said, "I'd like to be a household name, and have everyone know and ...

Adam & The Ants: The Ants Are Coming

So unplug the jukebox And do us all a favor That music's lost its taste So try another flavor — Adam and ...

Adam and Ants Back as 'Prince Charming' ...

Mirror, Mirror On The Wall... What Aspect Of 1981 Does It Pain You Most To Recall?

Overdressed twits taking Polaroids of one another in posey little clubs? Or the stern soapbox caterwauling of commentators who got themselves into a blue funk about everyone else's ...

The rise and rise of the pop video has brought mini-movies into every living room; Adam in panto, The Human League in detective thrillers, Barry ...

Malcolm McLaren, the shaker and baker of British punk, turned the Sex Pistols into an epochal event, turned Adam Ant around and now plays Svengali ...

LAST YEAR Adam Ant became a Dexys Midnight Runners fan. He went to their shows, always gave them name-checks in the press and even sent ...

Where's Your Head At, Adam Ant?

THE ROOM WAS full of balloons. A bouquet of balloons, sold nowadays like helium-filled, high-tech clusters that cling to the ceiling. A bundle of mail ...

THERE ARE absolutes in fashion. For instance, flare-legged trousers are absolutely more flattering to the vast majority of people than straight-legged trousers, since they make ...

Retrospective by Tom Hibbert, The History of Rock, 1984

AS THE '70S DREW TO A CLOSE, the British pop scene seemed distinctively lacking in glamour. Punk rock had made way for a ‘new wave’ ...

Adam Ant: Sex Person Without A Cause

Interview by John Mendelsohn, Creem, May 1984

ADAM ANT materialized in the lobby of a West Hollywood hotel that employs a lot of very stupid Englishwomen and offered me his hand. ...

Adam Ant is back. Three years after 'Prince Charming', he's ready to face up to his mistakes. And he's still fighting with a new single, ...

Adam And The Ants: Where Are They Now?

"DON'T WORRY – HE'LL soon be a hairdresser in North Finchley." So it was that, with Malcolm McLaren's unprophetic words as encouragement, the original Ants ...

Adam And The Ants: Stand And Deliver

THE BOY looked at Paul McCartney. "I saw him through a crack in the door, going up the stairs chatting with my mum," says Adam ...

Adam Ant: Adam And The Fall

STUART GODDARD is one of the most gifted – and most troubled – pop stars this country has ever produced. ...

STUART GODDARD attempted suicide, aged 21, in 1975. He woke up in Friern Barnet hospital and discharged himself. When he got home to his wife ...

THERE HAVE BEEN a lot of comebacks recently, some great, some not so. They've ranged from the "oh not them again" to the more exciting ...