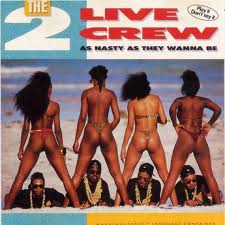 2 Live Crew: Pump Up The Bass

Rapping about bass and booty, Miami rap is party music with a foul mouth. And 2 Live Crew are the nasty rulers of the Miami ...

AS WE go to press there is a Sheriff's Department search on inBroward County, Fla., for the two members of salacious rap group 2 Live ...

WHEN RUDY Ray Moore talked dirty to the house parties, when Dolomite told inner-city movie audiences "fucking up motherfuckers is my game," when Redd Foxx ...

2 Live Crew: As Clean As They Wanna Be (Luke)

So just who is the most outrageous of them all? Is it SKID ROW'S SEBASTIAN BACH — banned from Wembley Stadium for life for using ...