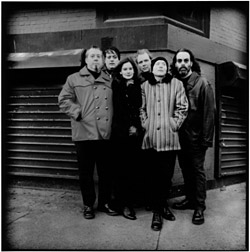 IT IS NOT generally known that the Sea Witch behind the last whirlpool in the north, who died for love, had a younger sister, and ...

LEST 10,000 Maniacs be mistaken for members of the SoHo establishment, check your map: the sextet's home base, Jamestown, New York, is roughly the same ...

College rock is alive and gigging in the US. MARK COOPER hears why from Michael Stipe of REM and Natalie Merchant of 10,000 Maniacs ...

IN 10,000 MANIACS' native America, hotel operators hang up when friends ask for the band by name and nervous radio programmers assume that Elektra are ...

WHILE 10,000 MANIACS ARE UP, UP, AND AWAY, SINGER NATALIE MERCHANT IS IMMERSED IN SOME GRAND DIVERSIONS OF HER OWN. SHE TAKES A SPRINGY STEP OFF THE UP ESCALATOR TO ...

Interview by Bruce Pollock, Guitar, May 1988

TURNING POINTS in the history of rock 'n' roll are moments frozen into the souls of those who witness them. Up in the Northeast Tundra ...

Natalie Merchant is fighting the world's battles in her songs. Mark Cooper finds out why. ...

10,000 Maniacs: The Queen of Nostalgia Gets Real

PRODUCER PAUL Fox came up as a keyboard player in the skinny-tie era. "When I first moved to L.A., there was a big banner on ...

MOJO: YOU'VE BEEN described as "interminably serious". Is that accurate? ...