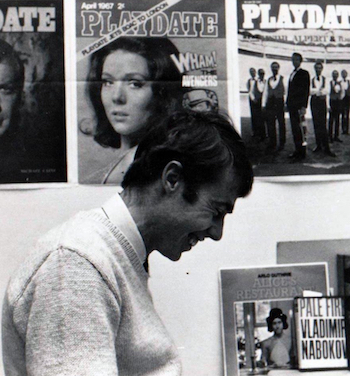 Tom McWilliams (pictured in 1968) is an editor and writer born in Auckland, New Zealand, in 1940. In 1956, the film Blackboard Jungle sent him hot-foot to buy a 78rpm copy of ‘Rock Around the Clock'. He worked as a graphic designer in the early days of New Zealand television, and began editing the literary magazine Mate. In 1968 he joined the staff of Playdate magazine, where he wrote features, reviewed films and records, and designed pages. From 1972 until retirement, he was a sub-editor at the New Zealand Listener, with occasional stints as the magazine's film reviewer. Favourite concerts include the Dave Brubeck Quartet, Thelonious Monk, Ella Fitzgerald, Jerry Lee Lewis, the Everly Brothers, Donovan, Fairport Convention, Little Feat, Bob Dylan, Ray Charles, Joan Armatrading, Bonnie Raitt, Paul McCartney, and Leonard Cohen.

Profile and Interview by Tom McWilliams, Playdate, May 1970

A STRANGER NAMED Julie Felix confesses, "I hide behind my guitar". With no guitar to hide behind she meets the press. Hides behind the questions? ...

Mayall: music as never before ...