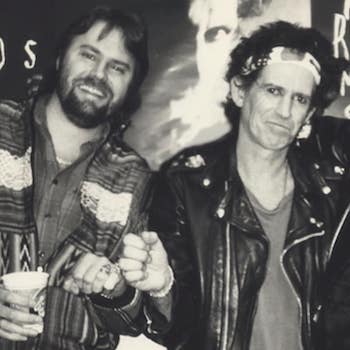 Canadian journalist Steve Newton (pictured with Keith Richards) started writing about music as a cub reporter for his hometown paper, The Chilliwack Progress, before graduating from the University of British Columbia and finding work at the Georgia Straight alternative newspaper in 1982. A devotee of scary movies, Newton spent 13 years as the Vancouver correspondent for fabled New York horror magazine Fangoria. He has also written for Experience Hendrix, Modern Drummer, and theguardian.com. Much of his work since the early '80s has been collected on his website, earofnewt.com. He also has a Patreon page, patreon.com/earofnewt, where he regularly posts his vintage audio interviews in their entirety. In 2018 he published his first book, Gord Downie, about the late frontman of Canuck guitar-rock greats the Tragically Hip.

The guitar great on his relationship with Jan Hammer; on his current live band and guitarist Jennifer Batten; on his latest album You Had It Coming; his use of modern technology; on getting his guitar sound; his memories of meeting Roy Buchanan back in the '70s; his admiration for John McLaughlin; suffering tinnitus, and his love of building hot rod cars.

THE INFLUENCE of the blues on British supergroups is well documented. The Stones, Zeppelin, Cream – they all lapped up the seminal works of people ...

WHEN FAMOUS rock guitarists reminisce about their first instruments, the talk tends toward dirt-cheap acoustics with heavy strings set so high off the fretboard that ...