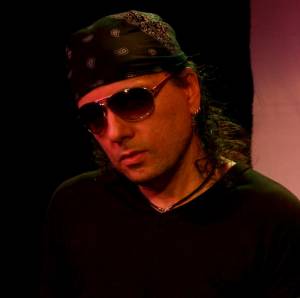 As a singer/songwriter/instrumentalist and guitarist, Joe is a melodious troubadour, having amassed quite an impressive track record in his career. This includes playing guitar for famed British music legend Steve Harley (Cockney Rebel fame) to performing on the festival stages in Europe to scoring a Top 20 hit on Radio Berlin in Germany. His songs and music speak with authority and emotion straight from the heart.

Since 2011, he has recorded and released four well received CDs through European record label W.A.R Productions, and tours Europe each year. As a solo artist, he has performed live in concert supporting the likes of Aussie music legends Mental As Anything, American rocker Peter Criss (KISS) and Scottish 1970s tartan sensations, Bay City Rollers. He recently issued his third full length studio album Louder Than Words as well as, an EP Heart Of Stone, released in Europe through Dutch label RVPrecords in late 2017.

"....one of the most melodic and stylish guitarists I've heard" – Steve Harley

“…[songs] containing a lot of heart, honesty and authenticity" – Rock It! Magazine (Germany)

Joe Matera: Tell me a bit about your background. You started writing songs at 13?Andrew Gold: Yeah, I started around then (13). My first song ...

In a rare and candid interview, the man behind the legendary amplifier talks to Joe Matera about the Marshall legacy. ...

WHEN CANADIAN ROCKERS Nickelback released their USA debut The State in March 2000, two singles from the album ‘Leader Of Men’ and ‘Breathe’ went top ...

The Beatles, George Martin: Arise, Sir George: The Man Behind the Beatles

BEST KNOWN as the man who produced the Beatles, Sir George Martin was there at the beginning of the British pop revolution and went on ...

WHILE HE MIGHT not be a household name on his own, Gregg Rolie is responsible for co-founding two phenomenally popular, multi-platinum many times over super ...

HOTEL VAST HORIZON is the latest offering from US-based singer-songwriter Chris Whitley – who's been likened to Bob Dylan – that sees him returning to ...

GOLDEN ROAD, the second solo album from Keith Urban, symbolizes the life and musical journey that has taken him from the Australian farm town of ...

JM: Over the years Primal Scream have continued to re-invent themselves musically with each subsequent release. In it's early incarnation it was a jangly Byrds ...

HE'S ALREADY ACHIEVED more as a songwriter and instrumentalist than most musicians could do in a lifetime. His sound is familiar, with ties to practically ...

The Saints: I’m Stranded: Ed Kuepper on the Making of the Saints’ Classic Debut

JM: You actually did two sessions for I’m Stranded. Did you use the same gear for both sessions? ...

Eagles of Death Metal, Queens Of The Stone Age: Josh Homme: New QOTSA Album "Shakes More Ass Than Ever Before"

ERA VULGARIS — which is Latin for Common Era —is the new studio outing for stoner-rock stalwarts Queens Of The Stone Age. ...