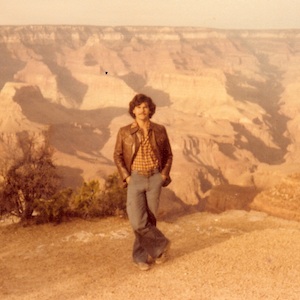 A dubious distinction at best, Grace Slick once told Freelancer Jim Esposito he was "like the weirdest guy I ever met." Based in Florida and then Los Angeles, Esposito was published in Creem, Circus, Rock Magazine, Zoo World and Oui when it was owned by Playboy.

A student of Gay Talese and Tom Wolfe’s New Journalism, Esposito wrote a number of insightful profiles, was known for his "on the scene" backstage reports, which often revealed a glimpse into an artist’s personality rarely seen otherwise. His low key approach opened up artists such as Deep Purple’s Ritchie Blackmore and The Starship’s Grace Slick, who would not speak more than superficially to others.

Today Esposito is a widely read Fantasy Football correspondent for ffMastermind.com under the nom de plume Jimmy The Finger. The movie rights to his second novel, High Fliers, an adventure comedy about drug smugglers in Florida, was optioned by Lou Adler, who produced Up In Smoke and Rocky Horror. The novel is now available as an eBook at Amazon.com and Barnes & Noble.

Buy music by Jimmy The Finger

MAYBE THE auditorium's marquee had the right idea by posting "Rock Concert" for all the world to see while supplying absolutely no details whatsoever – ...

IF DETERMINATION has anything whatsoever to do with success, Humble Pie is destined to become one of the major groups of the decade. Since their ...

2013 NOTE: When Machine Head shipped in '72 it was just another album, the latest release by an up-and-coming heavy metal band, stuck in the ...

THERE ARE lots of rumors circulating the rock industry, especially about Alice Cooper. However, the one about Alice having to get rid of his old ...

THERE IS SOMETHING strangely deceptive about the Doobie Brothers. First of all, their name conjures up images of Maynard G. Krebs, the ultimate beatnik and ...

Alice Cooper: Rehearsing at The Fillmore

2013 NOTE: My photographer Flash and I were in New York City on other business when we heard Alice Cooper was rehearsing his upcoming tour ...

THERE'S OBVIOUSLY more of a story behind Python Lee Jackson than GNP Crescendo would care to tell, probably because they're just as caught up in ...

Savoy Brown and Them Changes

2012 NOTE: I was young, probably a bit too much of a fan, and just looking to do a superficial, light-hearted story, but we now ...

"A NICE THING happened in New Jersey," related Marc Bolan with a gleam in his eye. He pauses momentarily and the small group of press ...

IT REALLY freaks me out when somebody tries to tell me Vol 4 is the best thing Black Sabbath ever did. ...

HARVEY MANDEL is a conversationalist of flucuatingly intensities. Sometimes he's right with you, sometimes he's way ahead, and other times he spaces out and you ...

Deep Purple: So Dreadfully Hot Here In The Colonies

2013 NOTE: I was into Deep Purple so when I noticed this debut album by a hitherto unknown group called Elf was produced by Roger ...

PERHAPS THE farthest-reaching cultural upheaval of our era is the formation of subcultures on every plane of society as an escape from the total immensity ...

ONE OF THE most eagerly awaited albums lately was Alvin Lee & Company. "That's old material that was recorded a long time ago," Alvin stated ...

GLENN HUGHES, bass player and vocalist, and drummer David Hollan – two thirds of Trapeze – sat side by side on a double bed in ...

DARYL HALL, one half of Whole Oats, decided that Philadelphia can lay claim to one of the most innocuous music scenes in the entire country. ...

TALK ABOUT a programmed response: why is it that every time you pick up a new Savoy Brown album, the first thing you do is ...

2021 INTRODUCTION: Wrote this story based on interviews I had with Deep Purple the night they played Pirate's World in Dania, Florida, on December 16th, ...

OFFHAND I'D venture to say there won't be many people disappointed with the new Derek and the Dominos. Perhaps the worst feature of the whole ...

IT'S GONNA BE mighty hard to write anything on Delbert & Glen without coming off like variation 39 of the classic American success story – ...

Report and Interview by Jim Esposito, Rock, 7 May 1973

BEN GANSELL is a stocky, heavy-set man of medium height with a full head of bristly hair which he keeps conscientiously trimmed just a shade ...

Report and Interview by Jim Esposito, Zoo World, 10 May 1973

2013 NOTE: A big Savoy Brown fan back in the day, much as I loved the group's transformation which produced Street Corner Talking I was ...

2012 NOTE: This Q&A hails from circa June 1973, for an interview published in Creem in September that year. It broke the story about the ...

IF YES HAVE nightmares, they're probably about Brownsville Station. ...

Take the limo to Purple's West Palm Beach Arena show! Listen to Ritchie badmouth his bandmates! The rancour, the hatred, the splits, and the imminent departure of Ian Gillan and others!

WHEN YOU really stop to, think about it, a drive-in theatre is the perfect place to see Bob Seger. After all, he is the hallowed ...

WILL SUCCESS spoil Dr. Hook? Or will Dr. Hook spoil success? Such is the saga of the madcap Medicine Show – a study in reverse ...

Flash Cadillac and the Continental Kids

YOU MIGHT FIND this hard to believe, but if it wasn't for a fifth of whiskey Flash Cadillac and the Continental Kids probably wouldn't be ...

BY NOW EVERYONE must know the reason it took Johnny Winter such a long time to get around to recording this album was not simply ...

The southern rock icon on 'Free Bird'; recording the first three albums; the band's poor backgrounds; and thoughts about music in general and guitar players in particular.

Do you think you can make it with Frankenstein? Or with David Jo Hansen? Or with Jerry Nolan? Or with Billy Murcia? Now that the ...

MOST PEOPLE seem to think Loudon Wainwright III is some kind of a folksinger, about halfway between Bob Dylan and Martin Mull in the general ...

The Pieman tells some splendid road stories; talks about recording their latest, Thunderbox; looks back at his schooldays and the Small Faces, and talks about his immediate plans.

Bachman Turner Overdrive, The Guess Who: Randy Bachman: Guess Who's Back Pages

UNDERSTANDABLY, Bachman-Turner Overdrive is the first band ever to challenge the Guess Who's sovereign supremacy on their own Canadian turf, because, more than any other ...

NEW ORLEANS – a party town without peer – annually hosts one solid week of rampant, unadulterated Bachanalia. It's called Mardi Gras. Sort of an ...

The Purple axe-wielder on the relationships within the band; recording latest album Burn in Montreux; finding David Coverdale and Glenn Hughes... and what the new chaps bring to the band.

YOU'D THINK that anyone who's paid as many dues as Johnny Winter would just wanna sit back and collect residuals, now wouldn't you? Not Johnny, ...

FIFTEEN FEET in front of me, Alice Cooper was doing his thing all over an elevated plywood stage. ...

THE ONLY THING missing from Keep On Smilin' is one of Capricorn's "Support Southern Music" buttons on the jacket of that blind old black beggar ...

Howlin' Wolf: All The Man Wants To Do Is Sing The Blues

Born Chester Burnett on June 10, 1910 on a plantation near Tupelo, Mississippi, Howlin' Wolf is a legendary black bluesman, ranking with the likes of ...

JOHN HAMMOND is sitting on a black wooden box hunched over his guitar, which is balanced on a two-by-four suspended between two wooden chairs in ...

THE BACHMAN-Turner Overdrive had just arrived backstage at the San Antonio Municipal Auditorium when the door to their dressing room burst open and seven extremely ...

Profile and Interview by Jim Esposito, Page One, December 1974

JIM STAFFORD stepped up to the microphone on the 15-yard line of the University of Florida's football field, pinpointed at the vortex of four spotlights ...

THE JEFFERSON Starship didn't hit Texas in a blaze of glory, they infiltrated it, with what had to be the most leisurely national tour by ...

FIRST THERE WAS English Rock 'n' Roll! Then there was Southern Blues! Now, from Mercury Records, those swell folks who brought you Bachman-Turner Overdrive, we ...

2009 note: CREEM flew me up to New Orleans to write a story on Elvin Bishop. Rejected this. Editor told me: "You didn't say why ...

Interview by Jim Esposito, Creem, May 1975

STEVE MARRIOTT laid back, looking like a spaced-out leprechaun, a cigarette in one hand and a bottle of Guinness in the other. ...

FOUR ALBUMS already? Wow. It's been four albums since Peter Frampton was still in Humble Pie. Five albums since Rock On – the only album ...

Jefferson Starship: Take Me To Your Leader

"GET ME A blonde wig," says Gracie Slick over the background noise of traffic down Broadway and 52nd Street in Fun City. ...

Deep Purple: Let Your Fingers Do The Talking…

… or Ritchie Blackmore Is Right. He Probably Could Wipe Up The Floor With Most Guitarists. ...

Hear the audio of this interview   ...

Disco Diva Donna on living and working in Europe; meeting Pete Bellotte and Giorgio Moroder; her family background in Boston and being a rebellious schoolkid, and tells us all about the making of the epochal 'Love To Love You Baby'.

Interviewed at the Airplane house in San Francisco, the chanteuse of psychedelia rambles in splendid style on her early days in the Great Society, writing White Rabbit, drugs and drink and much more.

Donna Summer: The Great Rocking Orgasmic Renaissance of AM Radio

(Which Considers The Question: Is Donna Summer Coming Or Going?) ...

GRACE SLICK, the original Acid Queen, was born Grace Wing October 30th, 1939, in Chicago, Illinois. Her father was an investment banker. Her mother, a ...

IN THE FUTURE the 1960s will be remembered as another Renaissance, an aesthetic revolution when art flourished. Only this time instead of white marble sculptures ...

NOTE: This is an unabridged "director's cut" version of the list Jim wrote for RockCritics.com. ...